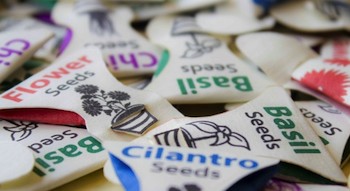 According to Roscoe, SeedTabs owes its existence to a several pound seed order that was a bit excessive for his small garden. Roscoe and his brother Will decided to share their abundance of seeds and began passing out small bags of seeds to all of their friends. At first glance, says Roscoe, people were hesitant to accept these small bags of seeds. “These drug-like baggies of seeds received confused looks that quickly morphed into smiles of appreciation.”

As Wyatt and Will observed the effect their seeds were having, they had an epiphany: people really enjoy growing things, but often don’t take the initiative to do it. “Everyone was excited to plant, but [they] weren’t willing to go out of their way to get seeds,” said Roscoe, “We created SeedTabs and sell them in high traffic locations to eliminate this hurdle preventing people from planting.”

Roscoe believes that increasing the availability of seeds has an immensely positive impact on communities. “We believe easy access to seeds in thousands of people’s daily routines can produce a movement of people starting to produce edible surroundings.” Roscoe also believes it makes communities healthier, stronger, and promotes an open and informed dialogue about sustainability.

The “seedtabs” themselves are small, paper seed-filled packets. In an effort to remain true to the company’s mission of environmental sustainability, the seeds are USDA-certified organic and the “tabs” are made from recycled paper and soy-based ink. Currently, SeedTabs offers four different types of seeds: basil, chives, cilantro, and wildflowers. Each tab holds enough seeds to plant two square feet or five individual pots.

Their target market, according Roscoe, is pretty expansive. “Our market is anyone with a sunny windowsill who enjoys fresh herbs,” said Roscoe, “This is around 100 million people in the U.S.” And they are continually pursuing new outlets for their product. “We are targeting high traffic retail stores in the U.S. that want a profitable way to support sustainability in their community.”

At this point, Wyatt and Will Roscoe are funding the development of the company themselves and have not yet made a profit, but they have big goals for the future which they hope will turn this around. Presently, their aim is to increase their sales volume enough that it can support one or two full-time employees. And Roscoe believes they can easily reach (and exceed) this goal if they can land America’s quintessential coffee shop as a client: Starbucks.

“Starbucks is over 70% of the US cafe market so we need to convince their executive team that SeedTabs will be profitable for them and will improve their surrounding communities,” said Roscoe. In addition to the “whale” of coffee accounts, Roscoe hopes to make connections with small, diverse businesses. “We would love any introductions to folks who can decide to start selling SeedTabs in their stores or cafes.”

In five years, Roscoe foresees SeedTabs sold in coffee shops across the U.S. He also hopes to foster an educational component to the business; SeedTabs is currently running a promotion where the company donates a SeedTab to schools for every Facebook like and Twitter follower they attain. In addition, they have a web application that educates users on growing requirements for their seeds while also allowing them to share where and when they plant them.

Response to the company and their products has been overwhelmingly positive; According to the SeedTabs website, cafes that have begun carrying their product are already selling 20 to 30 SeedTabs per week. It appears that Roscoe’s enthusiasm for community agriculture is contagious and is likely to spread across the U.S. in years to come. “Seeds are amazing,” said Roscoe, “They are blueprints to create a whole plant!”