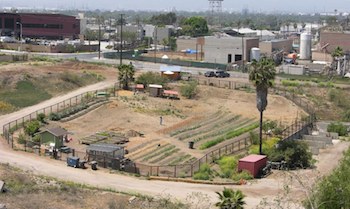 It’s not often that you hear of a region in California that hasn’t far surpassed the rest of the nation when it comes to understanding the import of local sustainable agriculture. That’s probably because you haven’t shopped for locally produced leafy greens in Long Beach. And if you have, you’ll know urban farms are few and very far between. That’s why Sasha Kanno, founder and president of the nonprofit Long Beach Local and owner of Farm Lot 59 feels herself quite an isolated drummer in the march for local growing.

Tired of commuting to Los Angeles for a career in the film industry, Kanno decided she wanted a family and bought a home, along with her husband, in Long Beach’s historic district. A mere block away was a distressed urban area losing itself to the violence of local gangs. Kanno helped begin a community garden on a vacant lot in the housing project. “I saw the potential for food production while I was doing that garden,” explains Kanno.

Farm Lot 59, retaining its original colonial title, is just under an acre of land in the city of Long Beach, CA. The piece of land is owned by the city and farmed by Sasha Kanno. Kanno began the farm after the lease on the community garden ran out. She entered a non-profit relationship with the city and became president for Long Beach Local, an umbrella organization for many small agriculture projects in Long Beach including a flower garden and farm. Farm Lot 59 has just completed its second season.

Programs at Farm Lot 59 include tree planting, a free mulch patch where folks are encouraged not only to take but to bring, a farm stand, workshop days, public days, lessons in bee keeping, farm irrigation, chicken keeping, seed planting and doing everything possible to encourage the community of Long Beach to see the potential right at their own back door. Bringing the concepts of sustainable urban agriculture that have worked well in other more establishing urban farming communities have caused Kanno to rethink some of her strategies.

Work share volunteers are staggered throughout the different growing seasons and learn about farm upkeep, irrigation, chicken rearing, honey production and general produce growing. Long Beach Local recently registered with Worldwide Opportunities on Organic Farms, better known as WWOOFF, to encourage folks from around the world to come to Long Beach and learn about growing in the American desert. Community members have opened up their homes to visiting farm students. The farm would love to work with the local colleges but currently none of them offer courses in agriculture.

Despite having worked with a number of schools in the past, Kanno decided to narrow the focus to one local elementary school to give a select group of students the full benefit of working a local farm. The children learn about urban farming, how to make planter boxes, the process of moving from a seed to a plant and the ability every child has to make something grow. Kanno’s the first to admit its rewarding work but she’s taken on a lot with little help or funding.

Funding comes mostly from farm stand revenue, membership dues in Long Beach Local and corporate sponsors. Working with state owned farm land does restrict Long Beach Local’s activities to an extent. “If I had a choice, if I had money, I would be a for-profit,” explains Kanno. Kanno is revisiting the idea of corporate tier sponsorship. “We are the only agricultural nonprofit based in town and since I’m independent and do it mostly on my own, I’m open to new endeavors,” states Kanno. One of those endeavors is another community garden for which Long Beach Local holds the land lease. They’ve helped plan the garden, teach irrigation strategies, bring the space up to ADA standards and choose the proper insurance. Everything she knows about establishing urban green space, Kanno has learned from doing or from researching in the evenings.

“When I had all this as a concept, I went to every single farm I could find on the map. I just looked at their stores, their spaces, their irrigation or whatever so, it was more like a crash course,” states Kanno. “Every farm is different, everybody’s land is different. Its trial and error like with anything. Here in the city there are half a million people that live in this town and there are some pretty well seasoned gardeners here so it doesn’t have to be a big farm to learn to be a master gardener or ultra farmer,” concludes Kanno.

Currently the farm shop is closed for the season and Kanno is rethinking her next harvest. She has things to fix, materials to replace and land to better utilize. Of course, public access and education is the main goal of Long Beach Local, in all its projects. “Because that’s the point – to provide organic and beyond produce and vegetables direct to the consumer eliminating the food miles and showing people this model that you can come here and buy your produce direct from the farm,” states Kanno. “You don’t have to live in a rural area, but Southern California isn’t really on current with that. The farther up the coast you go the more expected and supported these endeavors are, but here it’s still a big challenge.”

It’s been tough work to establish Long Beach Local, to learn how to farm, to begin programs, discover what works and what doesn’t, not to mention raise enough capital to gear up for next spring. Sasha Kanno has learned a lot in the last few years. “I would say (you need to) have a really good, solid business plan and know what everything costs. Understand that you’re gonna have to order all your farm supplies because there is nothing available locally, be open to change and keep good records. If you need to make a decision on the fly about how you structure things then do it,” advises Kanno.

Kanno began her farming career and Long Beach Local to spend more time with her family. She takes her two year old son Nalu with her to work at the farm every day, forging a relationship with the soil as well as a sense of civic responsibility. Her goal is to teach Long Beach, just like the rest of the Golden State, that they can farm in the city limits, produce local foods, reduce their impact on the planet and eat well too. It’s a reasonable goal for this SoCal farmer on a mission.

To donate or get involved go to http://www.longbeachlocal.org/.