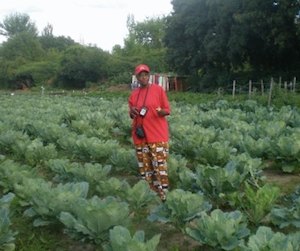 African Americans, especially children, have higher rates of obesity and type II diabetes than the general population, and are more likely to live in impoverished neighborhoods with limited access to fresh food. To address the inequities of the food system food in the African American community in the City of Detroit and establish African Americans as leaders of the local food and urban agriculture movement in their communities, the Detroit Black Food Security Network (DBFSN) pursues three avenues: policy, cooperatives, and agriculture.

To change policy, DBFSN helped establish the Detroit Food Policy Council, “an education, advocacy and policy organization led by Detroiters committed to creating a sustainable, local food system that promotes food security, food justice and food sovereignty in the city of Detroit.” To establish cooperatives, DBFSN established the Ujamaa Food Co-op Buying Club, and is working toward establishing a brick-and-mortar co-op grocery store in the city in 2014 in an effort to allow residents to have more control over their food dollar instead of serving as a market and source of profit for food retailers.

To develop agriculture, DBFSN operates the D-Town Farm, one of Detroit’s first urban agriculture projects. The 7-acre farm, which began operating in 2008, is located in city-owned Rouge Park on the City’s west side. The site houses a former tree nursery along the Rouge River, downstream of the Ford Rouge plant. The city licenses use of the site to DBFSN for $1 per year under a ten-year agreement. The site grows vegetables and salad greens.

Members of the DBFSN operate D-Town Farm collectively, with three part-time staff members and are augmented by volunteers on weekends and interns during the summer. A summer internship operates form a social justice perspective, training college students and individuals from the community in need of skills training.

The farm uses no chemicals and operates a composting operation on-site utilizing the refuse of Forgotten Harvest, a non-profit that rescues surplus perishable food from grocery stores and restaurants, delivering it to food pantries and soup kitchens around the region. Organic matter from Forgotten Harvest is combined with wood chips from the City of Detroit Forestry Department.

A water catchment system designed to take advantage of flooding on the property will be constructed in 2014. The farm features two high-tunnel hoop houses and two apiaries. The entire crop area is enclosed to keep out deer, which destroyed most of the first year’s crop. D-Town sells produce at farmers markets across the city and to wholesalers.

According to Malik Yakini, founder and Executive Director of DBFSN, the farm is heavily subsidized by grants and is working toward financial sustainability. Steps to establish fiscal stability include working to align crop planting more closely with demand, especially with wholesale customers.  Yakini hopes to train a group of volunteers to tend a legacy apple orchard on site; the apples hold a lot of value, but would require extensive effort to maintain.

D-Town also engages extensively in agritourism, hosting over 1,000 visitors to the farm last year, including school, church, and university groups. Yakini hopes to develop farm tourism into a larger source of revenue by offering a variety of products to be sold on-site to visitors.

In the past year, DBFSN and D-Town Farms received plenty of plaudits and grants, including the James Beard Foundation Leadership Award and a $10,000 grant from the Food Co-op Initiative to conduct community education and engagement sessions. The farm also completed a feasibility study for the expansion of its co-op buying club to a full service retail food co-op store and also hosted urban agriculture guru Will Allen and Vegan Chef Bryant Terry at its 6th Annual Harvest Festival, which was expanded to two days.