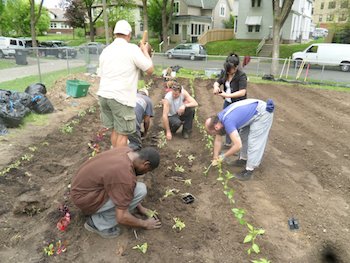 Project Sweetie Pie was founded in 2010 in response to the proposed closing of Minneapolis’ North Community High School. The Project idea was sparked during a conversation at an Afro-Eco board meeting. “We felt that the closing of a school was a killing of the heart of the community,” Chaney said. “Many families often center on their children. So, you take away that school, you take away a lot of the purpose for community.” To help keep the school open and show how important North High was to the community, Afro-Eco took on the Project and provided fiscal support.

The Project started small. At first, the program only grew sweet potatoes in North High’s greenhouse as part of an after school program. “They had a greenroom there that had been fallow for about 10 years,” Chaney said.

Once the groundwork for Project Sweetie Pie was laid, Chaney asked Rose McGee, owner of Deep Roots Gourmet Desserts and member of Afro-Eco, if she would be willing to buy sweet potatoes from the kids in the program. “Once she gave me her thumbs up, I knew that I had something,” Chaney said. “{I knew} we could develop our own revenue stream, and get young people and families, ex-offenders, and the community (involved).”

Project Sweetie Pie quickly began to grow and eventually added plots outside of the school with the help of the University of Minnesota’s master gardeners. The Project now supports 20-plus garden plots. Various Program partners, such as local nonprofits, schools, churches, and other neighborhood common gardens, manage each garden plot. “(The farming and garden management) methods are as diverse as the number of projects that we’re embarking on,” Chaney said. “Folks bring their level of skill. It’s kind of the Johnny Appleseed of urban farming.”

One of the new projects the organization is working on concerns the creation of an underground greenhouse. “One of the handicaps, if you will, to urban farming in this community, in particular, is (we get) a lot of attention, a lot of TLC, from May to September,” Chaney said. It’s difficult for the garden to maintain momentum throughout the year because there aren’t many outside, non-academic resources, such as commercial greenhouses, or any farming institutions, to fuel community support.

Chaney said that he hopes the underground greenhouse will allow the organization, as well as other local urban farms, to get additional support to grow year round. “They (the other local urban farms) are small start-ups and without the kind of resources it takes to create something that they can maintain the momentum — start early with their plantings — we are kind of a hostage to nature.”

While a lot of the Project’s produce is sold by community youth at local farmers’ markets, the organization also began a partnership with a local restaurant, Gandhi Mahal. “They have pulled together 16 gardening projects, and Project Sweetie Pie and our youth are working alongside them. The produce from that project is going to the restaurant,” Chaney said.

Although the Project is best known for its superb sweet potatoes, the organization has started to grow other types of produce, such as tomatoes, onions, cabbage, lettuce, kale, pumpkins, and peppers, too.

The organization continues to acquire different spaces through approaching vacant plot owners, and spaces that aren’t being used. And while the Project is still eager to take on additional vacant lots, Chaney said he and the other organizers are now trying to use the organization to help strengthen the community, increase physical activity and nutritional awareness in kids, and to help decrease urban decay and carbon emissions.