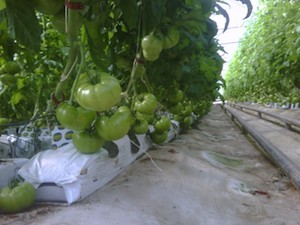 Beylik’s dad was an aerospace engineer and his grandfather was a plant biology teacher at Culver City High School back in the early 70s when they got an idea to work for themselves. Grandpa Beylik researched growing hydroponically in an industry that couldn’t imagine year-round greenhouse production with no dirt involved.

They started with gravel culture and a willingness to fail, and built up a farm near Fillmore, California that now covers two and a half acres with varietals of tomatoes (now grown in coconut fiber) and Persian cucumbers – all grown entirely indoors without a speck of dirt.

“For us, hydroponics became the answer to the rising price of land and the increasing loss of resources,” Beylik said. “Hydroponics give a much bigger yield per square foot than conventional dirt farming and take a lot less water.”

At first, Beylik Farms just offered their produce to the traditional chain grocery stores like Ralphs and Albertsons. In the late 80s, they found local farmers markets and now sell their goods at more than a dozen weekly farmers markets in Ventura and Los Angeles counties, with direct-to-consumer now being their mantra. Beylik also delivers directly to a number of area restaurants.

While year-round production makes for a profitable model for Beylik, hydroponic agriculture requires some scientific know-how. They must add nutrients and metals that plants normally suck up from soil – nitrogen, phosphorous, calcium, copper, manganese and boron. Such practices prevent hydroponic growers from becoming “certified organic,” but Beylik grows as sustainably as possible in a 21st century environment.

To pollinate his tomato plants, he brings in colonies of bumblebees (“Bees are amazing,” Beylik said. “They can sense where the pollen is ripe and just go to the right flower.”). He uses beneficial insects to control harmful pests and grows in coconut husk fiber because it holds water and air for the seeds to germinate. Humidity and temperature are carefully controlled by computers.

They harvest three days a week at peak ripeness (“My dad always said, ‘We pick dead red,’” Beylik said) and everything harvested is sold within five days. At times, they are so successful they overproduce and their farmers markets and restaurants can’t take their entire yield.

Beylik feels that his is the answer to feeding a growing nation.

“This new kind of food cycle is the future,” Beylik said. “Look at farmers in North Dakota. “In winter, the only local produce you can get is winter squash that has been picked in the fall. We’re so spoiled in California, where you can grow year round. We are the number one producer of so many crops and we literally feed the nation. But with greenhouse hydroponics, you can get even better yields.”

Beylik Family Farms isn’t entirely removed from dirt. They row plant eggplants, melons, artichokes and peppers around the perimeter of their greenhouses. When asked if he would consider taking hydroponics a step further and going with aquaponics (where fish ponds produce the nutrient-rich water that feeds the plants and plants in return feed the fish), Beylik considers.

“It’s tricky growing a fruity crop like tomatoes,” Beylik said. “You have to achieve a perfect balance of nutrients and, with aquaponics, you have to keep two life forms alive. Aquaponics are an excellent teaching tool for university-based enviro-science, but it doesn’t really pencil out at a commercial level.”

Beylik said that the biggest change in his business from the early days was moving out of the wholesale model into retail. For the future, he is considering diversifying into lettuces and Shiitake and oyster mushrooms. Meanwhile, he takes a day each year to show a little customer appreciation by staging a Tomato Festival on site, inviting the community to come to the farm for barbeque and to tour the farm.

“People are so removed from nature these days,” he said. “You’d think milk came from a carton, not a cow. This gives the local kids a chance to see things grow.”

As a third generation farmer, he doesn’t want to speculate whether his high-school aged children will follow in his footsteps.

“When I was a kid, I thought there was no way that I’d spend my life growing tomatoes,” Beylik said. “But look at me now!”