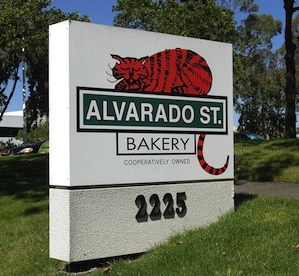 “We don’t want to exploit the environment, exploit workers, or exploit our customers,” said Joseph Tuck, General Coordinator/CEO, who sees sustainability clearest in these terms, of being non-exploitive.

From the beginning the company sought to be a model of a democratically run operation. The desire was to have workers make a sustainable wage, and at the same time create a product that promoted health in the community. While those objectives – particularly of paying themselves a living wage – were tough to manage early on, when five people were trying to bake 900 loaves in a single day, they hit the mark.

“Now we’re 124 people,” said Tuck. “We process 40,000 units a day and our workers’ average salary is about $65,000 a year, excluding benefits and patronage, which is the way coops distribute profits.”

Those units are sprouted wheat breads, tortillas, and buns. While the tortillas and buns contain some flour, the bread is flourless, just sprouted grains and other ingredients.

The first breads the cooperative made were also sprouted grain breads, but followed a different recipe, for Manna or Essene bread loaves. Another bakery’s sprouted loaves inspired bakers to make a shift.

This is an example, he said, of how they work – spying an opportunity to improve something and pursuing it. Mastering sprouted wheat breads is no small feat. While a number of bakeries across the country label their breads as sprouted grain, very few are entirely flour free.

The health factors of the bread made them even more enamored of it. Phytic acid is broken down during the sprouting process and the starches get converted to more complex carbohydrates that your body can digest more readily. Plus, they felt it tasted better than regular bread, so it was a winning formula on many levels.

“Our goal was to provide alternative and great healthful bread that supports sustainable agriculture, so we’re kind of proud that we were lucky enough to do that,” said Tuck. “You can make an organic cigarette, but it’s still a cigarette.”

Alvarado Street Bakery was green before the term was defined, and purchasing organic grains before national organic standards were set.

They source organic wheat berries through purveyors in the United States and Canada.

“We don’t source directly from farms,” explained Tuck. The amount that they need – enough tonnage to grow the 50,000 pounds of sprouts the bakery uses each day – makes consolidating suppliers a necessity.

They use grain cleaning and milling facilities that take organic grains from Colorado, Utah, Montana, California, and Canada. The facilities blend and clean the grain, and ship it in one ton totes to the company’s one bakery in Petaluma, California.

“We do what we can within what we do,” said Tuck. “Our oven has zero emissions. We put a 430 kilowatt solar system on our roof to try to eliminate a little bit of our footprint.”

At the same time, he acknowledges the limits of their efforts.

“We’re a business that uses gas to get to places,” he said. “We’re trying to do the best we can to be a business, or group of people, that treads lightly on the earth as best it can, yet provides health for its families and customers, and a decent wage.”

The logistics of being a worker cooperative both does and doesn’t take time, he said. The operation runs differently than when there were 5 of them, but the daily demands of bread production keep idealism from jamming up the works.

“When you’re doing basic food, you got to make it every day,” said Tuck.

“There’s a high degree of trust,” he said. “Sure there are managers, but if you walk through the building there aren’t a lot of people watching other people.”

Everyone is just baking. Or sprouting or packaging, taking care of the business that makes 40,000 breads happen every single day.

Tuck started off cleaning the bakery, and then he did packaging and eventually baking. More than 20 years ago, he started working in management at the cooperative.

Prior to the bakery he was a shepherd in the Scottish highlands, a job that does have some parallels to his career in good bread.

“Being in a bakery, you may not be on the farm, but you’re doing something that someone has to have on the planet,” he said, noting that he did not choose to work there for that reason. “After I was here, I realized that I hadn’t gotten that far away from doing something that’s directly involved with what we do to sustain ourselves.”

Maybe that idea, of the necessity of work, could be added to the definition of sustainability.