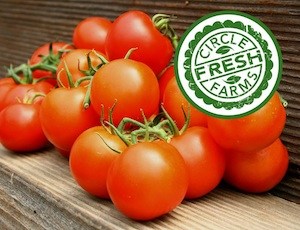 But that amiable description leaves out the extended version, which illustrates Circle Fresh’s efforts to transform an industry towards more locally produced foods, in ways that sustain and restore the health of the land and local communities, with a business model that increases opportunities for participants, while benefiting local retail stores.

“I lived for a while in Costa Rica with my children when they were small,” CEO Rich Naha said about his own Circle Fresh inspiration. “We’d cut up a plate of fresh-picked fruit for them and they’d devour it. When we moved to Denver, we tried to give them store-bought fruit and they turned up their noses. Their bodies knew what was healthful. It just blew my mind.”

Naha investigated and was alarmed to learn how long most commercial produce takes to reach a consumer. It can be weeks, with the fruit or vegetable’s inherent nutrients draining away with each passing day of sitting in a warehouse or on a truck. He figured there had to be a way to get produce ripe and rich to consumers – even consumers in an environment with a limited growing season – more quickly. Then he met John Nicholas.

Nicholas had worked in produce with a national-brand grocer for a generation before he quit to start growing his own zebra tomatoes and butter lettuce, using greenhouse-based, hydroponic technology that assures fresh, ripe tomatoes, even in the dead of winter.

“When my kids tried John’s tomatoes, they started eating them like apples,” Naha said of his Nicholas Farm partner. “John was selling everything he grew to local Whole Foods Markets, with a demand for more twenty times over. I knew there was a market.”

So Naha’s investment firm, Raindrop Partners, decided to scale the business. They found nearly a dozen local farmers ready to sign on to grow their produce according to the Circle Fresh specifications, and signed them up as partners. Circle Fresh set up production assistance programs, product testing, marketing development and management teams, developed a food safety compliance program and supervised delivery.

Suddenly, hot-off-the-vine tomatoes, and that-day-fresh greens started becoming available around Colorado to Whole Foods, farmers markets and other markets where people who care about local food shop. Farmers could operate profitably with 10,000 square feet of greenhouse, or from a two-acre urban food production center located right in the middle of town (as with Yarrow Farms in Wheat Ridge, Colorado). None of the Circle Fresh farmers use harmful chemicals and nothing is genetically modified.

Many of the farmers grow hydroponically or certified organic. All sell every pound they produce. Because greenhouse hydroponic yields can be 20 times that of conventional farming, a farmer doesn’t need a lot of land to make a go of it. And hydroponics use about a tenth the amount of water of soil-based agriculture to produce four or five times more per square foot. And the problems of mono-crop farming are nonexistent.

“When consumers hear their apple juice comes from China and has arsenic in it, they begin to pay attention to where their food is coming from,” Naha said. “Fresh just tastes better. So we developed tracking software so that people can scan their produce to see where it comes from and how far (or how little) it traveled to get there. We want Circle Fresh to be as transparent as possible.”

Naha said that, over the last century, corporate agriculture interests accustomed Americans to buying food that was a lot cheaper, but not nearly as healthful. He pointed out that it’s more expensive to greenhouse grow than in a field, but that Colorado only has a three-month growing season. Greenhouse growing is year-round. Circle Fresh currently has more than 200,000 square feet of greenhouse production operating in Colorado.

It’s not like greenhouse growing to serve local needs is brand new. Spain, Holland and Israel have embraced greenhouse agriculture in a big way – 70,000 acres in Spain alone.

Even Mexico, which has long supplied the U.S. with cheap, soil-farmed, pesticide-drenched, mono-crop food, is getting into it. Naha said that they are building more greenhouses in northern Mexico to grow food to export here.

Circle Fresh’s co-op model is attracting more farmers wanting to sign on as partner. Circle Fresh qualifies them, advises them, then facilitates delivery with trucks and equipment all the farmers can use. Naha says the local market demand is twenty times what his farmer partners can supply, so they are poised to grow – hopefully expanding into California eventually.

“It comes down to taste for a lot of consumers,” Naha said. “When we offer samples at Whole Foods, shoppers will bite in and say, ‘Oh, my gosh, this is like my grandma’s garden.’ When you have kids eating tomatoes willingly, you’ve got something good.”