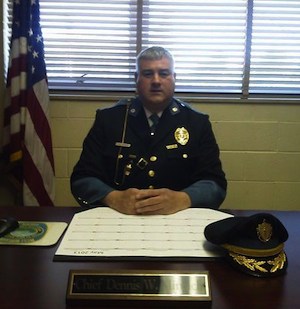 Not content with just being Chief of the West Boylston police force in Massachusetts, Dennis Minnich became the warden of a locked pen of 70 miniature horses; and that was only the beginning. He noticed the huge property containing them was falling into disarray as its owner was aging and in his limited free time, Minnich volunteered to help take care of the horses. In 2011, when the owner put the property up for sale, Minnich realized that he wanted to become a farmer.

To save the farm from encroaching commercial developers, he scrounged together the money, bought it, branded it Stone’s Throw Farm, and registered it as an Agricultural Preservation Restriction.

Then, he realized he knew next to nothing about farming.

So he convinced Claude Rainville, an old friend with ample farming experience to plant vegetables there. Then he found Ryan McKay, a 22-year-old fresh out of school to raise his livestock. He expects to erect an aquaculture shrimp farm on the property soon, and he is constantly looking for additional tenant producers to utilize his available land. The different producers currently renting plots on the property aren’t all part of the same company, but they collaboratively use the same land and supply chain to make all of their operations more successful.

Employing all organic methods and integrating livestock to clear land for crops through mob grazing, the partners at Stone’s Throw Farm are protecting the community from agricultural pollution while Minnich protects it from crime. The farmers of Stone’s Throw currently grow dozens of types of vegetables and raise and maintain a wide variety of livestock including a couple of water buffalo, camels, llamas, and alpacas. The farmers sell their meat, crops and eggs at a stand in front of the farm as well as at markets in downtown Boston, where they fetch a much higher price.

Together with his son Dennis Jr. (11), West Boylston’s police chief is developing a green thumb. Minnich takes classes on soil fertility at night and grows the farm slowly. Building an organic farm is extremely labor intensive, and Minnich warns that the work isn’t for everyone. “People come by and say I’m so glad you did this, because I never could,” he says. He wakes up at 5:00am every morning to weed and plant before going to the station. Then, he comes home to start again in the evenings.

In addition to sweat and time, farm infrastructure requires capital. New tractors cost around $50,000, so Stone’s Throw Farm uses the tractors that they inherited with the property, the newest of which is from 1957. On a smaller scale, buying in small volumes results in egg cartons that cost $0.50 each, so the price is raised for every dozen unless the customer brings them back.

Property value doesn’t provide much benefit either as the Agricultural Preservation Restriction (APR) status of the land makes refinancing the property exceedingly difficult. APR land eliminates the potential for commercial development in the future and while that was Minnich’s goal, it means that revaluation of the property cannot include that potential revenue. Instead, the value from the property only comes from the potential value of the farm’s harvest. Commercial banks don’t easily lend to businesses with property values and annual revenue so low, so the rare banks that cater to farmers are the primary recourse if a farm like Stone’s Throw needs to borrow for new infrastructure like a tractor.

Still, despite the challenges, the demand for local produce is growing quickly in Massachusetts, and Minnich is confident that the farm’s customer base will only grow. He says that as police chief, the community comes to him to help solve problems. They’re looking to him to provide a safe environment for their kids to grow up in, and that includes what they’re eating as well as what is happening on the streets. They want to know that their food hasn’t been sprayed or injected with dangerous chemicals. He bought the farm to make his town better.

“This community has been good to me. They gave me a job for twenty years and they treat me well. It’s been a great ride, and I love going to work every day. Now, I love coming home to the farm even more,” says Minnich. He expects his farm to be around in 100 years because the agricultural protection restriction insures that the land can only be used for farming and nothing else. “I’ll be gone, but it won’t be.”