A symphony, a balancing act and an art form. These are just a few ways Danny Merkley, Director of Water Resources for the California Farm Bureau Federation, describes managing the flow of water in the Golden State. It’s been his job since 2007, but a love of water blossomed early in this fourth generation California farmer.

“Growing up on the ranch I ran a number of irrigation systems from surface irrigation systems, row systems to sprinklers to, in a small way, some drip systems early in the 1990s. Water to me is an art form; moving water across a field, across large acreages of land, across more than just a 20 foot front yard. I’ve always been fascinated with water, but water policy I accidentally walked into when I got bit by the water bug working at the state water board in 2004,” shares Merkley.

Merkley earned a degree in farm management and worked the land for 17 years. Realizing the relationship between agriculture and legislation, Merkley became involved in local politics. At one point he worked for Representative Dan Lungren of Gold River. He then joined the State Water Resources Control Board in 2004 acting as a liaison between farmers and the state. After becoming acquainted with the water issues facing California, Merkley moved on to the California Farm Bureau.

“The California Farm Bureau Federation is a federation, which in itself implies that we are truly a grass roots organization. We have 53 county farm bureaus. What I do is work with county farm bureaus and their membership to be certain that what I’m doing to advocate on their behalf is not negatively impacting another one,” explains Merkley. “They look to me, to my colleagues up here in Sacramento, for expertise and assistance at the state level. We look to them for direction on how they are impacted by a certain policy or a certain piece of policy, whether it’s legislative or regulatory,” concludes Merkley. 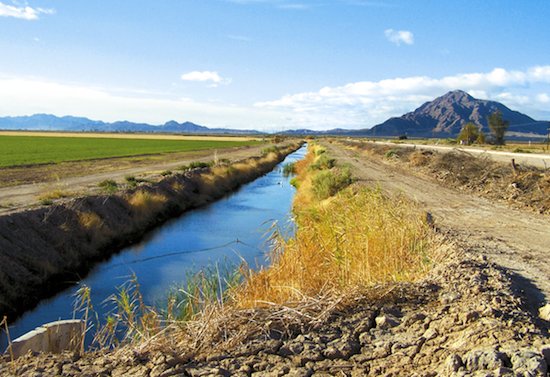 Understanding the water system of California is easier if visualized as three separate sections. Most water originates from the snow pack of the Sierra Mountains and precipitation found in the first section north of Sacramento. This water must then be distributed to the other two sections: the San Joaquin Sacramento Delta region (the middle or second section) and the far south (Los Angeles, San Diego and the surrounding farm land), or third section. Its Merkley’s job to make sure the water flows in a fair, balanced manner throughout the 58 counties so all of California’s 400 plus commodities can grow and thrive. Not an easy task with a tight budget and a 70 year old inefficient water system.

“The system was built when we had 17 million people. We’ve got 38 million today (roughly). We’re expected to have 50 million by the year 2050,” states Merkley. The problem is obvious, but fixing it will take money and time as Merkley explains. “This is such a complex system; you don’t just upgrade it overnight. And if you have neglected it for decades it would be a herculean task to: 1. Get it done in a timely fashion now you are already behind the curve on it, and 2. Raise the capital funds to do that. The state is not in a position to fund it with general fund dollars even though much of the updates that are necessary are public benefit updates to help protect, improve and enhance the delta’s ecosystem.”

Moving water from section one to section three without contaminating the water in section two takes up a lot of Merkley’s time. Volatile weather patterns, increased environmental needs, the Endangered Species Act, the care of regional fish supplies and a lack of efficient storage are just a few of the challenges that growers in California have to contend with for their water supply.

This year, the folks in the San Joaquin Valley are operating their farms on 20 percent of their allotted water supply. This means fallow fields, less annual crops, focus on perennials and of course, a decrease in revenue. So what would be the first step in fixing the California water system to help farmers across the state? For Merkley, there is no doubt: increase water storage. 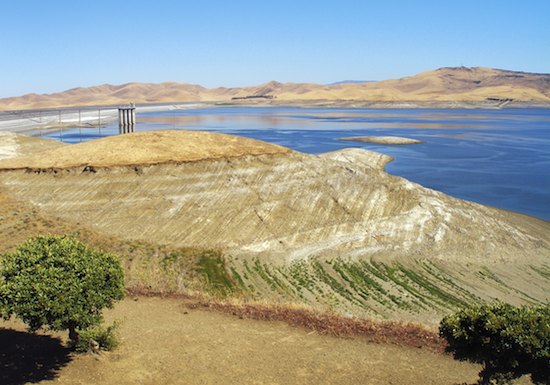 San Luis Reservoir is three-quarters empty, and water officials say the reservoir could drop to historic lows by the end of the summer. Photo/California Farm Bureau Federation

“If I had to pick one without hesitating I would say the need for new water storage. We need increased water storage because of three main factors: 1. The changes in the way we receive our rain fall or snow fall; 2. An increased demand for water by the environment; 3. Increased population. The system needs to be upgraded to be able to capture more when the big gulps are there and let water flow by when there are not big gulps. It is a much more volatile environment than it once was,” explains Merkley.

Water efficiency is a big deal in California for obvious reasons. The growers of all three regions have become experts in water use on their land. Merkley explains that agriculture water use only increased by two percent between 1967 and 2000 while productivity by volume increased 89 percent. The Bureau, through its county offices, works with farmers and ranchers to educate them on irrigation systems and techniques.

The farmers in California have been spending their own money to fix the water system, investing millions in irrigation equipment but they can only do so much. Capturing and storing water in amounts sufficient enough to keep an entire state growing and healthy, protecting California’s environment and ensuring fair and efficient distribution of the water supply will take a combination of public and private funds. A water bond is slated to appear before the California legislature in November of 2014 to try to put a dent in the problem, but Merkley worries it will not pass.

“There are efforts underway to look at the size and the structure of that water bond before it goes on the ballot in 2014 because many believe it’s too large and that the voters would not approve it. That would set us back even further than we already are in upgrading our water system to provide more reliable water supply not only for agriculture and irrigation purposes, but for cities that rely on help and on water being captured and stored and transported to other areas,” explains Merkley.

The world of California water policy is controversial, but Danny Merkley explains it’s always been that way. He keeps an unopened bottle of whiskey on the shelf in his office to remind him of the old adage that: “whiskey is for drinking and water is for fighting over.” People have been fighting over water in the west since the Gold Rush and there seems no end in sight.

“I would suggest to you that we do have enough water in this state; we don’t manage it well. Part of the reason we don’t manage it well is because of political conflict,” states Merkley. “The other part of it is because of fallout of some of that political conflict which is an inability to upgrade our system and maintain it for today’s conditions.”

The complex, controversial balancing act of water flow in the Golden State keeps Danny Merkley at the California Farm Bureau pretty busy. His advice for would be growers in the region? Well, it’s all about the water of course.

“Make every effort to ensure that you have a long and stable water supply before you invest in your future,” advises Merkley. “Today one of the first questions the bank will ask you is what is your water supply and proof that it’s a reliable water supply for the life of your loan or for the foreseeable future. If you’re putting in a permanent crop like almonds or grapes that have a 25 year life or longer you better make darn sure that you have a secure water supply during the life of that project. With water its soil, without water its dirt,” concludes Merkley.

A few Interesting water facts from the California Farm Bureau: