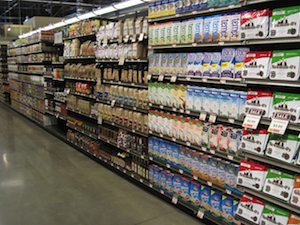 “I was tasked immediately to go find producers who were local,” said Lyndsay Meilleur, general manager at the new location. “I would hang out at farmers markets, and I shamelessly passed out business cards.”

One business she solicited was Argyle Cheese Farmer, whose Greek yogurt has groupies at the big farmers markets in the region, in Saratoga and Troy. When Meilleur told Marge Randles she wanted to carry her yogurt at the new store, the yogurt and cheesemaker hugged her, claiming it was the best Christmas present she’d ever gotten. The excitement was mutual.

“They bring their followers to our store,” said Meilleur. “These amazing producers built these relationships themselves.”

The fact that they and other producers believed in an imaginary market she was describing meant a lot to the general manager. Plus, they were willing to share the trust they’d established in direct marketing relationships.

Though the store did not open until May of this year, producers could see the success of the South Burlington, Vermont store, which is nearly 30 years old.

The first store Katy Lesser opened was 1200 square feet, with a four foot cooler to handle produce. At the time, the farmers market was small, too.

“I would say agriculture in Vermont was on the downslide,” Lesser recalled. The state was very dairy oriented and it was clear that dairy was struggling. Buying at the farmers market made sense, in terms of getting fresh food to her growing customer base. It also served another purpose. “I really wanted to see things stay green.”

That interest in supporting farming continues, and is built in to the way the store functions. Lesser likes her staff to know where food is grown, manufactured, and distributed. She sends people beyond the store to tour distribution facilities so they can understand how the supermarket fits into the process of receiving and shipping goods.

“I send them to as many places I can dream,” said Lesser, such as Tierra Farms, which makes nut mixes and nut butters; organic grain farmers and flour millers, Nitty Gritty Grain Company; and cheese makers at the Orb Weaver Farm.

Farmers and producers are well-known at the stores, too, appearing regularly with products and produce at the demonstration station, and on signs throughout retail operations.

“I think its utterly important to nurture the relationships,” said Lesser. “I need their food and they need my retail experience to tell them how to bring stuff to market.”

The help Healthy Living Market offers can take many shapes, such as a loan to a Vermont farmer for a hoophouse to enable year round kale production. Lesser and staff educate vendors on how they need to receive goods. Details like packaging, lot sizes and handling – all of these things are not universal or natural, especially as vendors switch from selling at a farm stand or farmers market to a wholesale operation.

“One of the hardest thing for people to accept is that this will work,” said Meilleur of the mental shift required. “We don’t want to get too big, I’ve heard a lot, and I say, hey we don’t either.”

The store does, however, actively pursue new vendors, sending staff out to meet and recruit farmers and producers. Lesser considers this investment of staff time a value, not a burden.

Larger businesses that have more manpower and buying power could really move food and make change happen, but it is not on their agenda. When asked why more supermarkets don’t pursue local with such intent, Meilleur thought it was because the process is not part of their business fabric.

“We have a lean staff so if I send someone out from produce, we have people covering them from other departments,” said Meilleur.

These store ambassadors, if you will, perform the service that larger companies can afford, sending their representatives or commissioning brokers to speak on their behalf to the store.

“I was on my way to find them, but they found me first,” said Seth Jacobs, who runs Slack Hollow Farm with Martha Johnson in Argyle, NY. While the relationship with the store is new, and the season has been very tough, Jacobs is glad for another wholesale market. The farm has marketed vegetables many different ways since they began in 1987, through a CSA (now disbanded), farmers markets, and wholesale. “It’s different for every business but we found we need to keep retail at two-thirds. We can’t let wholesale get too big.”

For Marge Randles, the advantages of having Healthy Living Market as an outlet are clear.

“We get paid less per item, but we don’t have to babysit and keep it cold,” she said. Her farmer’s market customers can stock up on a regular basis at the store. Plus the opportunities of this and other wholesale accounts are pushing the four-year old value added dairy business to a new level.

“We are in the process of looking for and buying land to build a building,” said Randle.