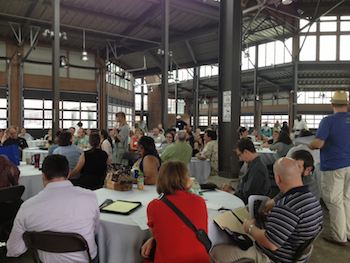 Detroit’s Eastern Market, the only remaining of three markets which once served the City of Detroit, was the site of the Michigan Food Hub Network’s statewide meeting on Tuesday, July 9, 2013. The meeting took place in the historic Detroit Eastern Market’s Shed 3, where over 200 people from all areas of the food world came to connect with and learn about funding resources, technical assistance programs, and to make connections. In attendance were farmers, institutional food service professionals, food processors and distributors, academics, and small independent grocers.

The group, coordinated by Michigan State University’s Center for Regional Food Systems in partnership with Morse Marketing Connections, LLC, and the Michigan Department of Agriculture and Rural Development, serves to facilitate collaboration between food producers and distributors to support the development of regional food networks, by providing access to networking opportunities, financial and technical expertise, and entrepreneurial education.

“This is where you come to find out who is doing things, and who is trying to do things, ” said Evan Smith, Senior Operations Manager with Cherry Capital Foods, a food distributor based in Traverse City.

“The reality is every food hub is different based on the needs of the community it serves. Collaborative processes and partnerships are crucial in developing regional food systems,” said Evans.

According to Evans, Cherry Capital Foods meets the The United State Department of Agriculture’s working definition of ‘Food Hub’: “a centrally located facility with a business management structure facilitating the aggregation, storage, processing, distribution, and/or marketing of locally/regionally produced food products.” The company recently opened a facility in the southern mid-Michigan town of Okemos to expand it’s operation and participate in the southern Michigan regional food hub.

“People are here to find out about funding sources; other people are looking for solutions to meet demand they currently can’t meet; and others are school system representatives looking for who they can work with on Farm to School,” says Evans.

“Eastern Market is a long-standing example of a food hub and in a bigger context, a food innovation district,” said Megan Masson-Minock, a planner a ENP Associates working as a food hub consultant for MSU. Masson-Minock consults on planning and zoning issues related to food hubs.

“Food hubs are a combination of different uses that are put into different zones, so there may not be an obvious answer for when municipalities are approached by someone wanting to start a Food hub,” she said. She provides guidance to entrepreneurs wishing to start food hubs on how to communicate with municipal officials and how to plan and budget for the zoning approval process.

The agenda included a preview of the results of the 2013 National Food Hub Survey, which was conducted by MSU. The survey queried over 100 different food hubs across the nation on profitability, employment, local aspects, products and services, and challenges and opportunities. A  webinar with full results is scheduled for September 19, 2013. Also included in the agenda was a presentation by Erika Block, founder of Local Orbit, a company that provides web-based technology tools and consulting to help businesses build local and regional food supply chains. A locally-sourced lunch was followed by an afternoon field trip to Forgotten Harvest, a surplus food rescue mission in Detroit that delivers extra catered and restauraunt foods and groceries to those in need.

“These statewide meetings are great for networking, finding tools and examples,” said Masson-Minock.

Despite its agricultural diversity, Michigan’s lack of a robust local food chain means the state does not meet its potential for in-sourcing that local food.

“The reality is that Michigan is the second-most agriculturally diverse state, but there are no cherries in Detroit,” says Evans. “Not all commodities are grown in the same place, markets need to be connected and that takes partnerships.”