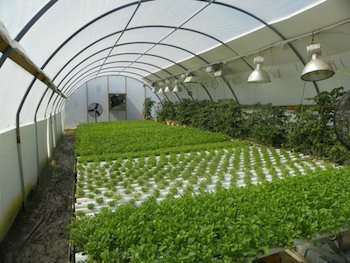 Darin and Deb Kelly were poised for high-paying traditional careers. She was a lawyer and he was completing coursework for a master’s degree — but then they abandoned the slavish pursuit of dollars for a life that brought happiness.

In 2006, the couple started selling produce from Good Life Farms, in Martinsville, Ind. Today, the farm grows using hydroponics, but the Kellys began with soil farming and they still grow a small number of crops using traditional field methods.

Throughout his life, Kelly has always grown vegetables. He developed a reputation for turning lawns into fields. “Basically, I didn’t believe in lawn,” he said.

After he met Deb, who shared his love of gardening, he turned her yard into a vegetable patch. One season, the two had extra beans on their hands.

They approached the business behind Deb’s house about setting up a farm stand. “We set up a stand on Sunday and we ended up making $100 in the afternoon,” Kelly recalled. They thought, “Wow, we just did our favorite hobby and made money.”

From there, the couple began selling produce at local farmer’s markets. They rented one field to plant, and then another. “It just kept growing in leaps and bounds,” said Kelly.

Five years ago, the couple decided to try hydroponics. At the time, they specialized in lettuce.

The Kellys set up a plastic bin in their basement that fit six lettuce plants, fed the plants nutrients and shined a 400-watt light on them. “We were total novices. It was terrible, but the plants turned out great,” said Kelly.

The lettuce grew faster in water than in the field, and the leaves contained more flavor. “We found a way of growing our crop that we specialized in faster, and in a way that produced that better quality plant,” said Kelly. The couple decided to try it on a larger scale.

Through online research, they found a store selling hydroponics equipment. Kelly was ready to purchase NFT channels that hold water and contain holes for growing the plants. At $20 each, he and Deb figured they would buy 30. “It was expensive,” he said.

Ultimately, Kelly spoke with the company owner’s son who offered him a substantial discount for buying channels the company had used for testing. “I said, ‘I’ll take all of them,’” said Kelly. He ended up with 120, for $4 each. Then, he got to work.

“I was a little lost because this was new,” said Kelly. “I had my background in knowing how plants grow, but when people starting talking pH adjustments to the water and truncheon and all those weird things that have to do with hydroponics — so we did a lot of research,” said Kelly. They built a greenhouse, and “off we were.”

Over the next four or five years, they built new greenhouses and expanded operations. Today, the farm has three greenhouses and harvests 1,250 plants each week, all year round.

Good Life Farms grows lettuce, arugula and basil through hydroponics, and one acre of seasonal heirloom tomatoes in the soil, along with small quantities of other crops. The farm has always avoided using pesticides and herbicides, and uses mineral salt as a fertilizer. The use of minerals prevents Good Life Farms from receiving organic certification; however, the methods are still natural.

“Our customers are happy because they feel like they’re getting a natural product,” said Kelly.

Good Life Farms’ business model changes frequently, but right now roughly half the farm’s profit comes from a large farmers market in Bloomington, Ind., and the other half comes from a mix of restaurants, grocery stores and wholesale outlets.

In the beginning, Kelly attended as many as five farmers markets each week, and that exposure led to business with restaurants.

The farm ran a profit the first year, but the early days were helped along by a small loan from a family friend and assistance from their retirement fund.

“We both gave up potential for a lot of money — a lot more than we make now — to do something that is for us very fulfilling,” said Kelly.

Challenges for Kelly include trying “to convince my wife to let me keep putting up greenhouses,” he jokes, but also making money last through the winter. Costs are lower in the summer, without the added expense of heating the greenhouse and paying for electricity. “Then you spend it all in the next few months,” when the temperature drops and daylight hours shorten, said Kelly.

The farm does have competition, but Good Life Farms’ hydroponics methods allow it to offer crops that others don’t due to seasonal conditions. With another hydroponic farmer, Good Life Farms happily co-exists, trying to avoid the same farmers markets. They’ve never articulated the understanding, but “that’s kind of how it worked out,” said Kelly.

For aspiring hydroponic farmers, Kelly offers encouragement that despite high startup costs, the business is a viable one. “It’s a great way of reaching the absolute potential for growing crops — volume-wise, space-wise, (and) environmentally-friendly-wise.”

He added, “it’s a little more technical and it’s a lot more expensive,” but “it really is the ultimate way of growing.”