In 1993, Bee, along with his wife, Deidre, and stepson, Roger Harris, built a small greenhouse on land in Pennsylvania they acquired with savings and a small business loan. At first, they grew lettuce. “It was somewhat of a gamble and a leap of faith in the technology and practice of hydroponics,” said Sun Aqua Farms Food Safety Manager Josh Zieger.

Soon after, a local supermarket asked the farm to grow basil, and the rest is history. Types of basil grown include Genovese, a year-round variety commonly used in pesto and Italian dishes, and lemon and Thai basil, which grow in spring and summer.

Even though the early days of Sun Aqua Farms were marked by risk, the family believed in the promise of hydroponics and thought the technology would help shape the future of agriculture. Now, 20 years later, the farm enjoys resounding success, selling to large retailers across eight states and winning awards for growing a tasty, local product.

Sun Aqua Farms grows its basil in 28 greenhouses on two properties. To grow the plant, the family exposes the roots to water mixed with nutrients, the exact composition controlled by a computer, based on need.

The farm is not chemical free — it occasionally uses a pesticide listed by the Organic Materials Review Institute. However, it is committed to sustainable farming.

Other ways of controlling pests include a method called Integrated Pest Management, which involves using four-step process to monitor garden invaders and set thresholds for action to defend against them. The farm also uses beneficial predator insects, such as ladybugs. Should aphids infiltrate the greenhouses, for example, the farm introduces ladybugs to prey on the pests and squash the invasion. 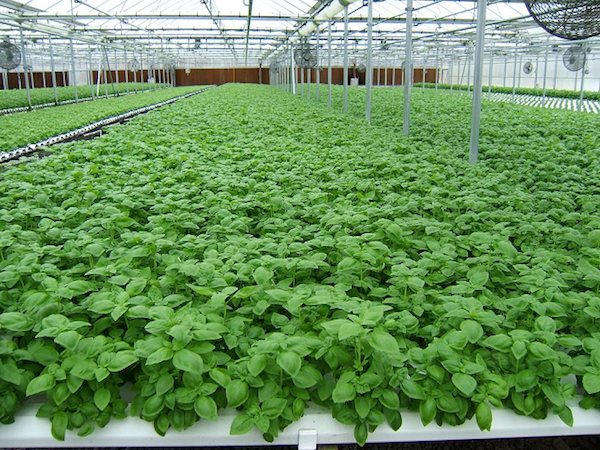 “We strongly believe in the need to use chemicals/pesticides responsibly and to limit them as much as possible,” said Zieger. The decision to farm using hydroponics is in itself a nod to sustainability, Zieger added, since the method uses less water and offers efficiency. “We like that we can produce a large amount of food on a small footprint,” he said.

Sun Aqua Farms’ business model focuses on sales to large regional stores, such as Wegmans and Giant, along with national retailers such as Whole Foods. Their product is delivered to eight states along the East Coast and in the Mid-Atlantic region, plus Washington D.C. To ensure freshness, the farm harvests to order and delivers the plant within 24 hours.

As hydroponic growing has grown in popularity, competitors have popped up. To differentiate themselves from the competition, Sun Aqua Farms focuses on quality and customer service.

“We would rather lose a crop than ship a product that does not meet our strict quality standards,” said Zieger. “We believe that it is our quality that sets us apart from other growers, and we are constantly looking for ways to improve it.”

The farm also focuses on food safety, and is in the process of receiving certification under the Global Food Safety Initiative, which was established by the food industry’s largest companies in response to recalls and consumer concerns.

Other industry partnerships include membership in the Pennsylvania Preferred Program, which is a marketing initiative sponsored by the state to help farmers connect with customers, including retailers, restaurants and schools.

“We consider ourselves to be a strong player in our area for local food,” said Zieger.

Because the farm grows its basil and ships all year, the cost of fuel for heating and transport represents one of its major operational challenges. To combat those challenges, the farm built a new, more efficient heating facility.

For future farmers, Zieger urges people to plan for several years of financial struggle before becoming profitable. Hydroponics, especially, has high overhead, and even though veggies grow fast, it still takes time to establish a customer base and ensure you can move your product.

He also encourages aspiring farmers to spend time learning the dynamics of growing crops on a small scale before expanding to a commercial operation.

“Unfortunately, there have been many people in our region who have attempted hydroponics on a commercial scale only to end up out of business in a short time,” Zieger said. “Spend the time, energy and money upfront to make your facilities as energy efficient as possible. It is well worth it.”