John Muir Ranch in Pasadena, Calif., has only been in full operation since 2011, but during the past two years, the once small, test garden has grown into a large, vegetable and flower producing farm.

The Ranch resides at the John Muir High School campus. When Doss Jones, former biology teacher, master gardener and founder of Muir Ranch, planted the Ranch’s first plot, she only used it as a learning garden for one of the high school’s elective courses. “It was six rows. [At the time,] she was working with another master gardener and they had a little bit of grant money to try and build a curriculum, but the money, after two years, it was gone. They couldn’t really do much more with the garden [at the time],” Erika Redke, former CSA manager at Muir Ranch, said.

Soon after Jones started the small-scale garden, she recruited the help of another fellow master gardener, Mud Baron, Muir Ranch’s current program director. After a lot of work and help from teachers and students, Jones and Barron turned the small garden plot into a 1.5-acre farm.

Muir Ranch currently has organic vegetables and flowers in production; half the field is flowers and the other half contains vegetable plantings. The space the Ranch occupies used to house bungalows. “It wasn’t the best soil. It was really compact and it’s going to take a while to get it to its full potential,” Redke said. “We’ve been amending it a lot and we’ve used certain crops like fava beans that oxygenate soil. I’m sure it will be better in the future. And already from last year the greens look better. Little by little, the soil is becoming richer.” 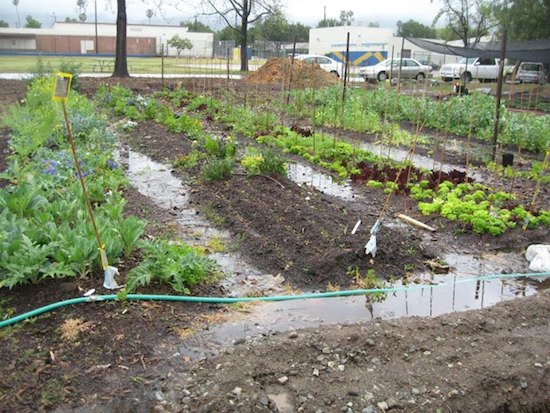 Every planting on the Ranch is grown without chemicals and pesticides. The farm uses permaculture, worm crop, worm castings, coffee grounds, and mulch. The Ranch also tries to stay water efficient, too. “It’s been great. We spent all of last year digging and installing irrigation. In fact, Pasadena Water and Power paid about six interns to work at Muir Ranch and [help] install the irrigation. They are actually doing that again this summer,” Redke said.

All of the Ranch’s produce goes in weekly CSA boxes and school cafeteria lunches. “We don’t deliver to residences, but we have sites through Pasadena. Currently, we have four,” Redke said. “We have about 150 customers weekly. Occasionally, we have travel partners [other community organizations] as well as those who operate their own CSAs.”

The Ranch also takes produce to local farmers’ markets. “Last year, we mostly sold our flowers at farmers’ markets,” Redke said. “Mud’s passion is flower arranging. It’s also been an outlet for some of the students who are not as into the CSA part of it. It’s another outlet for expression.”

The Ranch also sells its flowers at special events and fundraisers. The money earned at the CSA and from flower purchases supports the Ranch’s internship program.

The Ranch is able to sustain itself through selling its produce. It’s also fiscally sponsored by the Pasadena Education Foundation, which allows the Ranch to keep and maintain its non-profit status.

Students in grades nine-12 work at the Ranch. Some take the Ranch elective course and others also work as after-school interns on the farm. “Some have taken the class because they think it’s an easy credit,” Redke laughed. “But a few of them were really interested in gardening. There are some who don’t want to get dirty and it’s not for everyone, but regardless – the program does help kids learn where their food comes from and shows them how to work. I do see a good number of them that have been influenced by the program and want to continue after graduation.”

In addition to aiding student elective courses and an after-school internship program, the Ranch also is the new site for master gardener courses. “They [the master gardeners] recently changed their location for classes to Muir Ranch,” Redke said. “They were in LA. They just finished their spring season, their first session at Muir. A lot have been involved in the program, too. It’s a beneficial sponsorship.”

Also, in an effort to include community gardeners and reach out to the local, urban farming community, the Ranch has monthly “Plug Mobs” on every third Saturday during which the Ranch gives away free seedlings and veggie plugs.