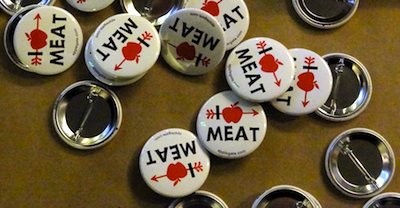 Nowadays, there seems to be at least one hackathon per hacker. Even in the notoriously tech-adverse sustainable agriculture world, we’ve seen events ranging from the software-focused Hacking for Good (Food) to the policy-oriented Farm Bill Hack to the National Young Farmer’s Coalition’s Farm Hack, which adapts commonplace farm equipment to innovative uses. Yet, there are still plenty of food chain issues that could use innovative approaches.

This past weekend, Stanford University hosted the Hack//Meat SF, the second of a series of meat supply chain hackathons organized by New York-based Food+Tech Connect. The event brought together in excess of 150 coders, ranchers, chefs, and designers to create better solutions for the meat supply chain over a rainy weekend, a particularly tough challenge in light of the complexity of the issues involved. Six organizations, including the James Beard Foundation and the Natural Resources Defense Fund, posed challenges that spanned from ‘How can we make whole animal butchery more profitable through tracking?’ to ‘How can we find, recruit and empower a million consumer activists to demand meat without antibiotics?’.  Aided by 56 mentors, and with the added inspiration of a butchery demonstration, the teams came up with around 20 solutions, all but one of which were software-based.  The sole hardware solution was a neat smart scale with silicon coated buttons, to allow butchers to keep inventory in real time, as they’re butchering the animal rather than using paper or memory to keep track. Targeted at whole animal butchers, the Ca$h Cow team believe that the product would make record keeping more accurate and have combined it with some analytics software.

As is often the case with the apps built at hackathons, the largest cohort were consumer focused, especially those that enhanced direct farm to consumer sales and educated consumers on how to select and use unusual cuts of meat, thereby reducing waste from each animal. One team proposed a ‘Good Meat Guide’ label to denote sustainable meat on packages in supermarkets, doubtless partly inspired by sustainable meat company and event sponsor, Applegate. According to one of the co-founders “we modeled it after the success of Seafood Watch, a fish and seafood labeling initiative”. Consumers can access a wealth of information on the sustainability and provenance of the meat through links on each label. An existing business that presented – Cow Share With Us – offers a CSA for beef in the Bay Area.  Members pick up deliveries at “meat parties”, the average cost of each delivery is $50, and each allocation includes a combination of roasts, steaks and ground beef. The business is both young and fast growing. “We’re both still working day jobs,” commented one of the co-founders on the sidelines of the event.  Next up is the introduction of “cow tippers”, who will be tasked with coordinating local buying groups.

The ever more pressing problem of connecting new ranchers to land was also well represented; ranchland prices were up 4% year on year in the first quarter[1] alone, yet there are evidently tracts of ranchland that are underutilized as their owners do not have reliable ranchers or farmers available to them. The hackathon’s winner, FarmStacker, described itself as “a combination of eHarmony, AirBNB and FarmLink” whose software connects unused ranch and farmland and sources of funding with would-be ranchers. The team says it’s planning to kick off with ten Bay Area pilots.

The most interesting trend of the weekend was the beginning of the rise of big data, which for these purposes means combining disparate sets of data to identify areas of greatest need or opportunity. Aside from publicly available data sets, hackers were also given access to meta-recipe site Yummly’s API and the USDA and ESRI backed ArcGIS platform. Stewardship Agent, another participant in the hackathon, noted that land with stewardship issues, such as weed or fire abatements, is the fastest growing category of farmland, and that it takes an average of four years for new ranchers to find land. They created an MLS agent – the real estate industry’s standard database – for stewardship issues, intended as a supplement to existing systems used by farmland agents. It aggregates existing data to give agents a quick snapshot of stewardship factors, such as the location of endangered species and weeds, thereby allowing them to more quickly match land with suitable buyers. The issue is a pressing one for landowners, as land management can cost up to $200/acre for parcels with complex issues, according to the Stewardship Agent team.

The greatest benefit of such events is, as ever, that folks who wouldn’t normally meet in their daily lives get to work on cool ideas together. As one attendee mused to me, “it’s pretty neat to see ranchers hanging out with coders and getting to walk away with something on their SmartPhone that they can use on the farm next week.”