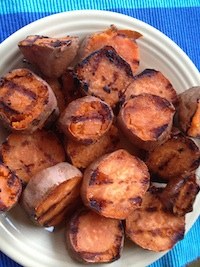 If you are a CSA member, you’ve been there. You get a box full of gorgeous produce accompanied by some kind of vegetable that you have no idea what to do with it. It stays in the back of your refrigerator until mold starts to form and you guiltily throw it into the compost.

Local Thyme was founded with the idea of ending that veggie guilt. Eighteen months ago, Pat Mulvey and Laura Gilliam launched a service to provide Community Supported Agriculture (CSA) groups with tried-and-true recipes for all the vegetables, fruits, and sustainably-farmed meats, fish and eggs that show up in farm boxes delivered around Madison, Wisconsin.

Mulvey has 20 years as a private chef under her belt, and Gilliam is a master preserver and an organic community gardener who knows what to grow to complement all those exotic vegetables. Together, they coordinate recipes that Mulvey has developed from her years of working with every type of appetite – from finicky to adventurous – synchronizing those recipes with the contents of local CSA weekly farm boxes.

“We are a hotbed of CSAs up here,” Mulvey said. “I work with maybe 50 CSAs just in Wisconsin. And as a private chef, maybe a third of the families I work for are CSA members. So, yeah, we’re plugged into the concept.”

The only part of the concept that doesn’t work is the left-over farm box contents, or the produce that presents too much of a challenge to the novice chef. Mulvey wanted to limit those calls for last-minute pizza deliveries, and see more of the CSA food on the plate, not in the compost.

The idea to provide farm box recipes came when a friend with a newborn asked if she could help out with meals until the young parents recovered some equilibrium. 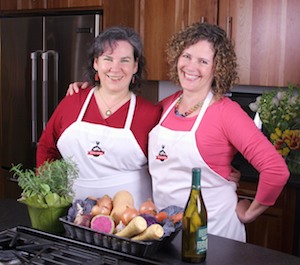 “I looked in her fridge and saw all these root vegetables pushed to the back and going to rot,” Mulvey said. “So, I just cooked everything she had and froze it. My friend said, ‘You should just tell people what to do, so they’ll know what to cook.’ That was my a-ha moment.”

With 20 years of recipes already organized by ingredients, nutritional value and cost, Mulvey and Gilliam just had to get the CSAs and farmers on board. They already knew that the number one reason for CSA attrition is “veggie guilt” and the primary reason people didn’t join in the first place was fear of unknown vegetables.

So Mulvey started contacting CSAs to find out what would be going in their weekly farm boxes. The service was a hit with the first five farms that signed up. The Local Thyme team was able to pair recipes with seasonal produce and hit on ideas to plan “cooking across the box” – devising recipes that would utilize most of the box’s diverse contents.

So, watermelon, onions and pepper comprised a recipe for Watermelon Gazpacho Soup. More conventional recipes were prepared for other products, like gluten-free pasta, meats, eggs and cheeses. They wanted to be able to satisfy a straight forward green-beans-with-toasted-almonds appetite as much as a more adventurous vegetable curry.

Their next challenge was to codify their business model and figure out how to charge customers.

“Basically, we kept track of all our time for everything,” Mulvey said. “Shopping, cooking, clerical work, data entry, the whole thing. We averaged out the hours to what the going rate was around Madison and figured a price to charge.”

Within a year, Mulvey was preparing Farmers Market shopping plans and working on personal shopping plans as a client option. They set a basic membership price of $15 a year for access to the Local Thyme website’s recipe trove, and $60 a year for the individualized Farmers Market shopping plan matched to weekly CSAs (since Wisconsin doesn’t have much to offer in the winter, these plans are limited to growing season months). Once a week, Mulvey posts recipes for whatever is going into a particular CSA farm box.

People interested in Local Thyme services get free membership with the Madison-area CSAs, can join individually or ask their own local CSAs to sign up for the service. Mulvey has recipes for everything – it’s just a matter of matching them to the weekly box load.

Both women are long-time food activists, with a vision of transforming modern-day, corporate food cycles to fresh and local, farm to table. As the Fair Share Coalition Chef, Mulvey edited the “From Asparagus to Zucchini: A Guide to Cooking Farm-Fresh Seasonal Produce” cookbook and just published a new cookbook: “Farm, Fresh and Fast.” They are part of a team helping the Madison School District shape a plan to create a more sustainable school food program.

“The rush of everyday life sometimes prevents people from planning properly for their CSA food box,” Mulvey said. “We think Local Thyme will keep people eating locally and our farmers in business.”

And example of Mulvey’s creative use of an often-ignored vegetable is her recipe for Rhubarb Vinaigrette:

It’s great on all kinds of green salads, grilled meats and fish. If you have some cilantro on hand, a couple of tablespoons chopped into this is nice.

1. In small saucepan, simmer rhubarb, sugar, garlic and ginger with vinegar, until rhubarb is tender, about 6-8 minutes. Allow rhubarb to cool down.

2. Pour rhubarb mixture into a blender, and add mustard and lime juice, and puree until smooth. Remove lid from blender, and with motor running, pour the oil in a slow stream to emulsify the dressing. Pour into a bowl and stir in minced cilantro, if you have some on hand. Season to taste with salt and pepper. Refrigerate until cold. This can be done in advance, and held in the refrigerator for at least a week.