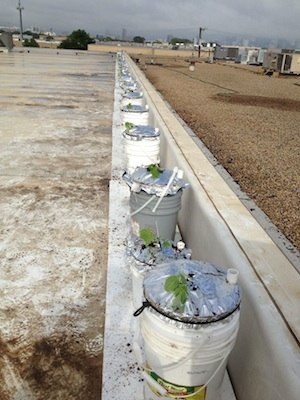 Heirloom watermelon patch in repurposed buckets planted on a Dallas rooftop by Eat the Yard. Photo Credit: Eat the Yard.

James Jeffers and Steve Smith, veterans and co-owners of Eat the Yard, in Dallas, Texas, founded the sprawling, urban farming operation a year ago after a night of good conversation and beer. Jeffers and Smith were already into eating healthy and growing organic, but wanted to really commit to growing their own produce. So, they committed – and ended up pulling up their yards and planting edibles and fruit trees. Soon, Smith and Jeffers began getting produce requests from local restaurants.

While Jeffers and Smith had a basic understanding of gardening when they started, the co-owners got a thorough education in farming from the Farmer Veteran Coalition (FVC), a nonprofit that helps get returning veterans funded and into farming. The FVC teaches veterans how to get into sustainable farming and provides farming education as well as farm funding. In fact, the FVC helped the duo receive grants, which funded the organization’s purchase of a new tractor.

Since Eat the Yard’s inception, Jeffers and Smith have worked to make the organization a complete, closed-loop system. “[We thought that] if we were going to sell to restaurants and were going to get into urban farming, we wanted to do it as off the grid and as green as we possibly could,” Jeffers said. To achieve a closed-loop system, the co-owners take compost and oil-waste from one of the Dallas restaurants with which Eat the Yard does business. Jeffers and Smith then break the materials down into compost, and grow more vegetables to sell back to the restaurant. Eventually, the duo wants to use the oil to make biodiesel to run the organization’s truck.

Over the past year, Eat the Yard has set up numerous farm, rooftop and yard growing operations across the Oak Cliff, Dallas, Texas, area. “We have almost seven plots now in various places. Three or four of them are in the immediate area of Oak Cliff. There are three properties that are under some pretty intense production, and there are some community gardens that we are involved in. Another friend of ours owns a 200,000 square-foot warehouse in the design district and we started farming his rooftop. We put a watermelon patch up there and some Earth Buckets,” Jeffers said.

The Farm also has another plot in Preston Hollow. Currently, the Farm grows a wide range of vegetables and herbs. “We are trying to do specially items again with the hydroponics — doing trays and microgreens, and any special weekly items they [the restaurant] wants — we usually do it via hydroponics,” Jeffers said.

The two aim to divert food from the landfill and reuse materials people give them, such as five-gallon food-grade buckets. “Initially, we were using them for composting and we needed a source for gardening on contaminated sites, or sites where there was no soil to work with, so, we found some videos on low-tech Earth Buckets made out of five-gallon buckets,” Jeffers said. “They are double-stacked, have a water reservoir inside. You cover the dirt with plastic and they are very water efficient. They don’t evaporate. It sort of wicks the water up from the bottom.”

Smith and Jeffers use many water conservation practices on the farm, such as rainwater collection, biofilms, and plastic and biodegradable mulches. The bio-films help with evaporation. And if Jeffers and Smith don’t have access to recycled water, they remove chlorine from other water sources through filtering.

As stated previously, the co-owners also have a few locations where they use hydroponics. “We have a friend up north who has a relatively small system that’s about 126-lettuce head production and nutrient film technique,” Jeffers said. “He’s got that under hydroponic production. And we’re adding spotter trays [four-inch deep troughs that are about 10 feet long]  to it now. They use them to grow grass starters for cows in drought, but we’re [planning on] doing some microgreens in them.” Also, while Eat the Yard’s Preston Hollow location already has a pond with fish that’s being used to water the location’s plantings, Jeffers plans to start a small, two test-bed aquaponics pet project on his property.

Smith and Jeffers have yet to make back everything they’ve put into Eat the Yard, but the co-owners are optimistic about the organization’s future. Over the past few months, Jeffers has received numerous press requests and positive feedback from locals about Eat the Yard’s work. “We do what we can and every spot is unique and different. There’s a lot of problem solving. And a lot of just looking at what we do everyday and trying to reduce, reuse, reclaim, repurpose — whatever we can,” Jeffers said.