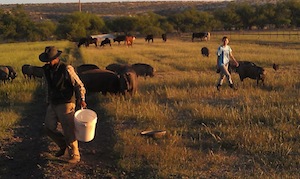 The peacefully grazing cows and incrementally ripening vegetables on southern Arizona’s Walking J Farm only hint at the ardent work of their owners, Tina Bartsch and Jim McManus.

The 40-something husband and wife duo are pouring their most productive years into this land, so it will sustain them, along with dozens of other families. Bartsch also speaks of shifting cultural attitudes toward eating, changing expectations that food be cheap and processed.

“When you’re dealing with the food system, you’re trying to change a culture,” said Bartsch.

“To some people, it’s such a foreign concept,” she added. “The land you’re living on is your livelihood and you’re trying to make it healthy so it can produce at its capacity.”

Bartsch speaks frequently about the interconnected world, about how buying farm fresh vegetables cannot be separated from deeper social issues, such as public health, living wages and strong local economies.

Acting on a vision, Walking J Farm has partnered with nearby Sleeping Frog Farms to begin a nonprofit, Farm Education and Resource Network (FERN). FERN aims to raise money to place interns on farms throughout the Southwest.

Walking J frequently hosts interns, ranging from high school students to college and beyond. The apprentice farmers receive stipends and free food, and Walking J receives labor at a steep discount. Without the bevy of people eager to learn farming, Bartsch says labor costs would create an incredible challenge.

The polyculture that is Walking J Farm spans 72 acres and is located about an hour south of Tucson. It offers an array of vegetables, including tomatoes, peppers, lettuce, carrots, beets and turnips, along with animals, including pigs, cows and chickens. Pigs and cows are sold as meat, while chickens are kept only for eggs.

“We want to keep our farm diverse,” said Bartsch. Diversity allows the farm’s plants and animals to build a greater defense against disease, pests and weather conditions. “When you have diversity, you have more strength.”

Walking J’s diversity extends to its business model, with Bartsch and McManus pursuing several income sources. This year of production marks the farm’s third, and Bartsch projects it will bring the first profit. The couple has yet to pay themselves. The farm’s business models continue to evolve.

Walking J started with beef, then began offering chicken meat and pork. “The meat birds were not sustainable for us,” said Bartsch. They brought in three tons of feed every two-and-a-half weeks before briefly transitioning to free range. “We had a lot of inputs,” said Bartsch. “It wasn’t our idea of sustainability.”

So they moved away from chicken meat, while continuing to offer beef and pork. Other revenue comes from the farm’s mix of CSA customers, farmer’s markets and beef shares, in which customers buy a quarter or half of an animal.

Selling retail cuts of beef accounts for Walking J’s biggest sales, and future plans bet on expanding that segment of the business. Customers would buy cuts to last the month instead of making weekly visits to the store — part of the cultural shift that Bartsch hopes to create through food.

Bartsch and McManus are working to reduce the number of farmer’s markets in which they participate and increase online sales to customers in Tucson and Phoenix. The goal is to reduce fuel costs, the largest expense.

Goals also include expanding the CSA from this season’s 27 customers to 40 customers and starting a cow-calf operation. Broader, long-term objectives include collaborating with other farmers to aggregate food and sell to grocery stores.

The farm is still young. The couple moved to it four years ago, acquiring the property through a land trade. Bartsch and McManus previously lived closer to the border, and wanted to live near a community with their two children. They found Walking J, but didn’t have the money to purchase it.

Walking J’s previous owner wanted Bartsch and McManus’ old property, but also didn’t have the money. The properties had similar values, so they traded. McManus’ mother helped the couple financially, and she is a partner in the property, but not the farm.

“I don’t know any of the young farmers around here who are doing it out of their pockets,” said Bartsch. “They either have help from family, or another business or someone leasing them the land.”

She added, “Without the grace of family, we wouldn’t be doing this either. There’s no way we could afford a 72-acre farm with water rights and a well.”

Walking J’s cattle eats grass, while the chicken and pigs eat a mix of grass and non-GMO feed, locally grown when possible. The farm, which has always employed chemical-free and sustainable growing practices, is Certified Naturally Grown. The peer-reviewed process involves participating farmers abiding by specific growing conditions. “It’s basically the same rules (as organic), but it’s not run by the government,” said Bartsch. It also involves lower fees and less paperwork.

Bartsch advises aspiring farmers to have a partner and set boundaries to avoid burnout. For escape, Bartsch meditates and practices yoga each morning. She also makes sure to leave the property.

“We need to leave the farm sometimes, even if it’s just for a day,” she says. Boundaries are key, especially when you pour every ounce of your effort into something so vast.

“I feel like I’m constantly educating people,” said Bartsch. “Not only are you creating a business being an entrepreneur and selling a product — you have to educate people on what you’re selling,” she added.

Persisting requires patience and the hope that more people will support local farms. Bartsch draws inspiration from her enthusiastic farm interns and the customers that her devotion feeds. She stays focused on her goals. “This is where we want to go and what we want to create.”