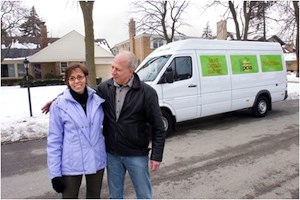 In 2006, Shelly Herman and Irvin Cernauskas set out on a mission to make local and organic food available year-round in two major Midwestern markets: Chicago and Milwaukee. Cernauskas, who had been actively involved the environmental nonprofit community and in creating markets for local farmers, already had the connections needed to help create a stronger relationship between local farmers and urban consumers.

“The farmers were talking about how they want to spend more time farming and less time trucking their food all over the place,” said Herman. “At the same time we realized that people in the city or suburbs need a way to get fresh, healthy food in a year-round way.” To fill this growing need, Herman and Cernauskas started Irv and Shelly’s Fresh Picks, a local and organic food delivery service.

Irv and Shelly’s Fresh Picks started small like most young businesses do. Herman and Cernauskas only had one van initially and did all of the work themselves. Today, the business has grown substantially. “We have 20 employees and four vans now that we use every day of the week, multiple times a day,” said Herman.

Herman recognizes that they entered into the local and organic food business at a good time— the market was growing but was not nearly as competitive as it is today. “The field is much more crowded now than when we started,” said Herman.

In order to stand out in a growing crowd of local and organic food options, Irv and Shelly’s Fresh Picks has focused on making it as easy and convenient as possible for people to get fresh, healthy food. Customers can place their order online up until 6:00 a.m. on the day before the food is delivered. Furthermore, according to Herman, Fresh Picks has a slight edge over CSAs because customers are able to order what they want, when they want it, with no long-term commitments.

But rather than being competition for local farmers, Fresh Picks is constantly working to get farmers more exposure and connect them to a new client base. They buy from about 100 farms, most of which are located in Illinois, Indiana, Michigan, and Wisconsin, and carry a large selection of products including local and humanely raised meat, wild caught Great Lakes fish, free-range organic eggs, a diverse array of local and organic produce, and a generous selection of local and organic prepared foods. What is most impressive, however, is Herman and Cernauskas’s year-round commitment to local food— a commitment that is not easy to uphold in a harsh Midwestern climate. “Even in the winter we’re still at least 50% local,” said Herman.

In addition to local food, Fresh Picks is also committed to sustainability. Herman says they do whatever they can to keep their operation as earth-friendly as possible. They use reusable containers rather than disposable wax cartons and they try to make the routing of their deliveries sustainable as well.

According to Herman, their delivery system has been constructed precisely to travel as little miles (and use as little gas) as possible. Fresh Picks uses software that maps each route to maximize efficiency and ensure that each delivery truck is traveling the least number of miles it can while still delivering to all of their customers. “We just go to certain neighborhoods on certain days and explain to our customers that we’re trying to reduce the miles that we have to travel to deliver their food,” said Herman. “Fortunately we’re saving them a trip to the store, which is great for them and great for the miles.”

By filling a much needed niche, Herman and Cernauskas have managed to create a thriving food business that is not only sustainable but is also profitable. “We broke even after the first couple of years,” said Herman, “So we do very well, we certainly eat well, which is the best part!”

But, what is also clear is that Irv and Shelly’s Fresh Picks is a business based around a much broader mission: to create a healthier food system that is accessible to everyone. According to Herman, they work hard to keep their prices affordable and to deliver to a diverse range of neighborhoods throughout Chicago and Milwaukee. “We don’t want eating healthy, organic, local food to be a rich person’s choice,” said Herman, “It should really be for everybody.”