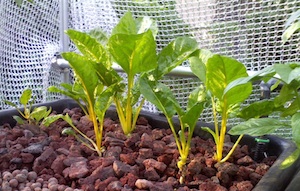 Paul Trudeau, owner of Southside Aquaponic Farm (SAF), founded his small, farming operation in Sacramento, Calif., in 2009. Although Trudeau’s aquaponic farm began as a hobby, the farm has since grown into a business endeavor and now serves Mulvaney’s Building & Loan, a Sacramento, Calif., restaurant.

In the beginning, Trudeau scoured the Internet to find information and resources on how to start a small-scale aquaponic farm on his own. He found a lot of information and became involved with other people in the Sacramento area who worked with aquaponics. The learning process also included a lot of help from aquaponics organizations.

Trudeau received a lot of assistance from Growing Power, an organization that supports communities by helping people create community food systems, in Milwaukee, Wis. He completed a weekend training session with the organization. Trudeau also took an entry-level, extension course last year with Nelson and Pade, an aquaponics company, and the University of Wisconsin.

Trudeau has stocked his aquaponic farm with bluegill and a few goldfish. “I grow the fish I do because they are suited to the seasonal temperatures here, so I don’t need to heat or cool the water,” Trudeau said. He grows lettuce, kale, cucumbers, spinach, watercress, peas, some other veggies and herbs, and a specialty Japanese herb called shiso for Mulvaney’s, which the restaurant requested.

To keep his farm as healthy and organic as possible, Trudeau handles pests with natural methods, such as hand picking pests, washing off pests and bringing in beneficial predator insects.

The entire SAF operation uses little water and energy. Trudeau uses under 100 watts for a small water pump and a couple other essentials. He also makes his vegetable deliveries by foot so as not to waste fuel, and uses alternative methods to keep his operation warm during the cooler months. “I’m fortunate to live in a pretty mild climate. Over the winters, I haven’t had to use any artificial heat, and I’m trying to keep it that way to keep the energy down.”

Trudeau keeps large piles of compost around the border of his greenhouse to keep the building warm – a trick he learned from Growing Power. “In the summer, I’m growing a tomato vine up the side of the greenhouse. It’s not aquaponic, but it is on a drip system. And instead of trying to cool with electricity, I try to provide some shade.”

Growing and the Evolving Aquaponics Community

As stated previously, Trudeau only grows to sell to one restaurant. “It’s just a part-time project right now. It’s not a full-time occupation. I don’t have the capacity to sell to more than one or two restaurants.” His plan is to demonstrate and learn as he goes with his small-scale farm, and eventually expand. Trudeau is, however, making a bit of money, which does help his operation. He has yet to earn what he’s put into his farm, though. “It’ll come,” Trudeau said. “I’m looking for a larger lot where I can put up a full-sized greenhouse, and a full-sized aquaponics operation. That would be a full-time operation.”

Trudeau said that the biggest change with aquaponics locally since he started is that nobody was really doing aquaponics in Sacramento when he began his project. But he found a strong aquaponics-centric community through an online group and forum. Last summer, there were 50 members, and now there are 100. “To me the biggest change is the numbers of people doing it, and how we contact each other and help each other out,” Trudeau said. “A lot of people have noticed that aquaponics people get very enthusiastic,” Trudeau laughed. “But is also seems that people tend to be very cooperative and social about it, too.”

Additionally, to spread the word about his farm and aquaponics, Trudeau attends various functions. “The State fair will be in July in Sacramento,” Trudeau said. “Last year was the first time I incorporated aquaponics into that. It was a big hit last year.”