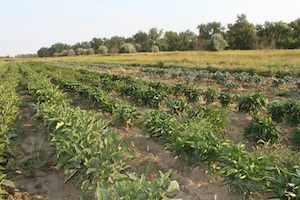 “We worked in California, Arizona and Vermont for a while so you know there was a thriving local food movement there. So when we came to North Dakota we saw that there wasn’t really. There really wasn’t any professional level CSA and there’s a 100,000 people in this community so we thought ‘well geez there’s got to be room for us to create a business like this.’” –Brian McGinness, Riverbound Farm

Bounded by the historic Missouri River, the North Dakota based Riverbound Farm is home to Brian and Angie McGinness and their children. A farm located in the river bottom comprised of 10-acres of grow space, cottonwood forest, pasture land and wetlands, is a less than typical location for growing certified organic vegetables and creating a community supported agriculture system (CSA). Turns out it’s also a lesson for farmers across the nation. If you grow it, they will come.

Creating sustainable agriculture in the temperamental Missouri flood lands of Mandan, North Dakota where saturated fields, hail storms, high winds and a traditionally short growing season are the norm is certainly not ideal. Angie McGinness’ family homesteaded the property where Riverbound Farm now sits over a century ago but most folks don’t choose to farm organically or polyculturally in the region. The plains seem a little behind the times when it comes to sustainable agriculture but it’s really more a matter of access, which few have been willing to provide. Until of course, the McGinness’ came to town.

“The season can be kind of short if you don’t work hard to make it longer,” shares Brian McGinness. This is the fourth season at Riverbound for the McGinness’ and they’ll be putting the 75,000 plants they started in greenhouses into the fields around the middle of June and grow until around Thanksgiving; over two months longer than the area usually manages. Sustainable practices involve the use of manure that comes from the 100 head rodeo horse farm down the road. They incorporate staggered planting, high tunnels, row covers and cold hardy crops into their system of certified organic growing. How do they do it all? Draft horses of course.

The draft horses utilized around the Riverbound Farm are great for visitors during farm tours, but as they eat the grass on the fallow pasture, create the manure for the raised beds and pull the ploughs and cultivators that work the soil, they help reduce waste, expense and mechanized help on the farm. And having horses is very handy in the turbulent storms of North Dakota. Where a tractor will sink in a sodden field, a draft horse will just keep plodding along, providing a great advantage this season to the McGinness clan as they are able to prepare beds while their neighbors wait for fields to dry.

So why go with horses rather than tractors or less intensive dig methods? “I used to make all these practical arguments for why horses were better and more sustainable but the best reason is they are just really enjoyable,” shares McGinness. “Working with the horses there’s just something about it for me personally that’s more rewarding than riding on a tractor.”

Riverbound Farm grows a range of over 40 vegetables on 10 acres specializing in daily and weekly diet foods and throwing the odd exotic in there for fun. They partner with other area farmers that supply their customers with baked goods, meat and eggs, but they supply all the vegetables for the CSA they started. “We want people to see it as a reason to join: a diversity of vegetables over a long season,” explains McGinness.

Being the only CSA in the area, Riverbound Farm has become a hub for the local slow food movement. “That’s what we wanted to offer, a place to concentrate it so anybody that’s interested in finding pastured poultry can call us and we pretty much know everybody doing pastured poultry in a hundred mile radius so we can put them in contact with each other and they can use our CSA as a meeting place to sign up. It seems to be working nicely,” concludes McGinness.

Unlike many other areas of the country where the local food culture is well established, North Dakota’s reaction to the CSA was a pleasant surprise for McGinness. “We tried to picture who would join and I pictured little Vermonters in North Dakota. I was really surprised by the fact that we have a very wide demographic of people interested in joining the CSA. You couldn’t describe them,” shares McGinness. “I was certainly pleased by what a wide diversity of people it was not a particular type of person. I think that’s pretty encouraging.”

Good local press has been a real catalyst for the farm’s business. People simply didn’t know they existed until they read about them in the local paper. Now with 220 shares, the CSA is at capacity. They’ve had to let a few extra folks in every year, but McGinness states they are almost at a cut-off point.

“You can only grow for so many at a time. We want to do a good job,” explains McGinness. “Every year not only have we grown in the size of our CSA, but we’ve sold out earlier. This year we sold out at the beginning of April.” It’s a good reminder to other regions that because people live in traditionally hard growing places it doesn’t mean they don’t crave local organic produce or a local food culture.

“We’ve met lots of people who say they are thinking strongly of creating their own local food business so I think that as people find out about it the demand increases and hopefully some others farms will follow,” states McGinness. CSAs may be the ideal business model for nontraditional regions wanting to expand their local organic food base. As McGinness explains, “Out here we’re dealing with extremes so there’s a lot of inherent risk. The CSA model does a lot to mitigate that.”

McGinness feels that because most of their customers come from a rural background or have a more recent connection to farms, they can better appreciate the risks involved with farming. If one crop fails they are happy to take a little extra cucumber that week rather than get upset or take their business to another supplier.

Riverbound Farm offers customers the chance to pick up their produce at the farm or pick their own right off the vine. They provide recreational facilities for the kids so parents can select their items in peace as well as the chance for folks to volunteer and aid in the growing of their own food. Add to that the organic growing classes they provide and the Riverbound Farm folk are truly pioneers in North Dakota’s food system evolution.