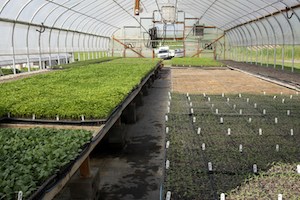 When Terra and Mike Brownback purchased their countryside farm along with an old, rundown farmhouse in 1978, they had no idea that their little dream would become one of the most prominent and successful organic farms in Central Pennsylvania. With big dreams and a little savings, the suburban kids embarked on a mission to make their own small imprint on the future of sustainable agriculture. Included with their 56 acres in Loysville, Perry County, was an 1880 farmhouse in desperate need of a makeover to even make it livable. “Our house was in such bad shape. The windows were even broken out,” says Terra Brownback.

Thirty-seven years of blood, sweat and tears put into fixing up their home, learning how to farm and purchasing additional adjacent acreage have truly paid off. The Brownback’s now run Spiral Path Farm, a 255-acre farm that is home to a 20-year-old, 2,300-member CSA. It is a USDA Organic-certified producer for local farmers markets and a collection of regional organic wholesale warehouses.

First-time, beginning farmers take note. The Brownbacks didn’t have land passed down to them from family, and they didn’t arrive on their farm with solid farming experience or a whole lot of money to get started. They were first-time farmers themselves. What they did have were high aspirations to make a difference in alleviating modern strains on the environment and economy through sustainable agriculture.

Their journey sounds quite similar to recent stories of young people who are stepping up to take action against our broken food and political systems through farming. “Mike was reading about how the world could end and the finances were going to fail,” explains Brownback. “We wanted to learn how to be self sufficient.” The Brownbacks decided the way to do it was to farm organically and with respect paid to the environment.

The Brownbacks secured their farm property through owner financing, “which was pretty sweet for two young kids,” Brownback says, explaining that the couple started their farming endeavor by raising pigs. But after two years on the farm, the pig market bottomed out and the Brownbacks found themselves defaulting on their homeowners loan, forcing them to obtain an emergency Farm Home Administration (FHA) loan. They kept plugging away and working hard for their dream, despite their financial hiccups.

During their first 15 years of raising livestock, the Brownbacks learned how to garden, growing wholesome vegetables for their immediate family. They also developed the skills of machinery repairs, canning, freezing and making bread. By the early 1990s, Spiral Path Farm transitioned to organic vegetables.

Farming in a way that is responsible and gentle to the environment was always at the top of the Brownback’s priority list, even in their early days when they were dreaming up their farm plan. Today, they have realized many of their Earth-friendly goals. “We attempt to be as sustainable as we can and we believe in conservation,” says Brownback. To meet its sustainable agriculture goals, Spiral Path Farm uses cover crops on all of its fields to help control erosion and build soil fertility. Utilizing the land’s many hills and curves, the farm employs a contour farming method in which grassy waterways help to control erosion. Using a large, impressive vermicomposting shed the farm composts any of its vegetables that do not get sold or donated to food banks. “This is the hub of the fertility on our farm,” says Brownback. “We don’t buy fertilizer, and we only buy micro-nutrients on an as-needed basis per soil testing.”

Spiral Path Farm also harnesses the power from the sun to create energy for its farm with its striking collection of 630 solar panels and 21 inverters that generate about 176 kilowatt hours each year. “We designed [our solar energy] to handle our annual needs. We are grid tied at any given minute,” Brownback explains. “If our panels are producing more kilowatts than what we are handling, it goes into the grid and we resell it.” 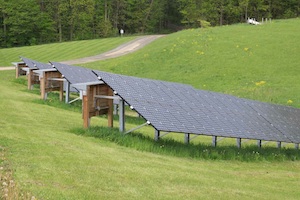 As for the future, Spiral Path Farm will continue to build on its soil fertility, utilizing cover crops and native pollinators. “We have some honeybee hives and have been experimenting with different cover crops so that the native pollinators have something to feed on throughout the season,” Brownback explains.

Though Spiral Path Farm has enjoyed hard-earned success over the years, it hasn’t come without challenges. “Like with any other farm, the number one issue is dealing with Mother Nature, because you don’t have control,” says Brownback. The farm takes measures to form an irrigation system, but Brownback says there is only so much farmers can do to work with weather conditions.

With the amount of CSA customers and wholesale customers Spiral Path serves, Brownback says the business side of running the farm can be challenging. For one, because organic vegetable farming is labor intensive, it can be a difficult task finding good help, she says. Keeping up with food safety regulations is also a daily business task, says Brownback.

And, running a family farm, in which the Brownbacks work closely with family members can be tricky. Mike and Terra’s son Will and his wife Deidre, son Lucas and granddaughter Ivory all put in hours on the farm in different capacities. “It can be challenging finding family time,” says Brownback. “Being a business partner with your spouse and grown children can all be rewarding but can be challenging too.”

As front-runners within the sustainable agriculture and CSA movements, the Brownbacks are excited to see the next generation continue their organic farming work at Spiral Path Farm. “As Mike and I are getting older, we have two sons that are interested in the farm and are working here. We have some succession planning starting,” Brownback says. “Mike and I are thrilled to see it continue. We get a great feeling from it.”

An Inspiration for the New Wave

Spiral Path Farm’s journey is a great success story that can serve as an inspiring example for the young people joining the front lines of the sustainable agriculture movement within an environmental and political landscape that is reminiscent of the 70s. Brownback wants the new wave of modern farmers to know that it can be done.

“Believe in yourself and hold tight to that,” urges Brownback. “Don’t be afraid to take risks, because farming as a whole is a risk. We had no idea [about the business and banking end of farming]. We just jumped off the cliff. We didn’t get held up in our brains worrying about budgets. Farming is risky, there are risks financially, but don’t be afraid to borrow money and use the system to get the change in what you want to do, change in something you believe.” She also urges beginning farmers to not be timid about financial success, explaining that many young people associate making money with something negative. “You have to make money and be profitable to stay on your farm,” she says. “Think abundantly.”

Remembering to be observant is the most important thing to keep in mind when setting out on an organic farming journey, she explains. “Always use your keen observation of what is happening on your farm. This is the most valuable tool in learning how to work with Mother Nature,” Brownback relays. “Many things about farming are out of our control but the Earth is bountiful and generous. We learn from observation.”