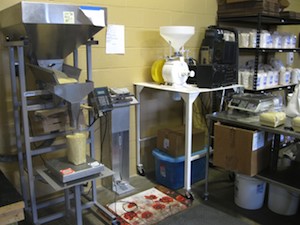 Oregon’s Willamette Valley is known as the grass seed capital of the world, and grows almost the entire ryegrass crop for the United States. While most of the agricultural land in the valley is still dedicated to grass seed production, farmers are diversifying to compensate for a marketplace hit hard by the recession. Tom Hunton added edible grasses to his crop list, and started a mill.

The lateral shift makes sense because small grains like wheat, barley and rye are grasses, so farmers in the Willamette Valley have most of the equipment needed to plant and harvest these crops.

“We didn’t think the grass seed industry would ever come back to the size and scale it had,” said Hunton, owner of Camas Country Mill in Junction City, Oregon. The heavy decline in the housing market, water restrictions, and other changes in the way people live influenced the decision to open the mill.

“We still grow a lot of grass seed yet, but we focus on forage varieties for pastures and hay, and cover crops,” he said. “We tried to move away from the aesthetic crops, away from just something somebody wants to look at or walk on, to something that feeds animals, or people, or soil.”

The farm’s location between Seattle and San Francisco, where it could serve a wide range of informed eaters was key to opening the mill. If growers in Montana wanted to undertake a similar enterprise, Hunton said, they wouldn’t have access to the markets.

Customers devoted to local want to know more than their farmer. They want to see their food in the field, and in the case of flour, at the mill. The Hunton’s knew they’d be able to provide that transparency, and each year their outreach efforts increase. They sell at farmers markets, and invite schools and other groups to tour the farm and mill. This season, they’re offering monthly farm walks, inviting their distributors to bring customers – from natural food stores, bakeries and institutional food services like public schools – to the farm.

“So they can see garbanzos four inches high, and next month they’ll be blooming,” said Hunton, noting that garbanzos and lentils are not the norm in the area.

Experimentation, he jokes, is in his DNA. His father was a farmer, too, and always tried out new crops. Tom inherited this openness, and has passed it on to his son Jason, who manages the farm and has an interest in organics. Diversity is also not a new route; Tom continues to run a farm supply business that sells inputs to growers.

The Huntons farm about 3200 acres. Human food crops are about 500 acres, and about 400 of those are planted with crops that go to the mill. Lentils, beans and chickpeas make up the rest of the food acreage, and are cleaned at their cleaning facility.

Camas Country Mill opened in the spring of 2011 and is milling 100,000 pounds of flour a month on a stone mill made in Denmark. The large stones are run at a slow RPM; the speed and size allow for minimal heat damage to the bran and germ of the kernels. A series of sifters allows larger particles to be reground, and result in a finer milled whole grain flour.

The mill grinds a range of flours, including standard pastry and bread flours, and specialty grains like Red Fife and emmer. Last year, they brought in spelt and emmer, and are growing these themselves this season, and contracting out to local farms. The teff planted in the Willamette Valley this year won’t begin to meet demand, but it’s a start.

Farmers in the area are also planting lentils for the first time, based on the food bank’s willingness to purchase them. In 2012, the mill sold all the barley they were going to mill for flour to the food bank, which wanted barley and lentils for a high protein, high fiber soup mix.

Growing for the food bank is very rewarding, and just one of the surprise benefits of opening the mill. Another is the passion people have for the project.

“We have growers that have said we like what you’re doing, don’t pay us for the grain until you get paid for it, that’s pretty revolutionary,” said Hunton.

Some want their crops to go specifically to the food bank. Some want their flour going to the schools because they believe in trying to help foster better nutrition.

“We wanted to be able to have the scale that we could be cost effective across socioeconomic strata because we’re talking about staples,” Hunton said. High quality staples should be accessibly priced, and volume production allows that while supporting the required infrastructure.

Feeding the mind is a big part of the mill, too. School tours start at the farm, where, Hunton said, “winter grains are heading out, so they can start feeling that green immature kernel.”

Students crack grains at the mill between paver stones. They bag a pound of flour, and bring it home with a recipe for muffins they’ve sampled. Parents give this field trip high grades when they report in at farmers market stands, just saying hello or buying more flour.