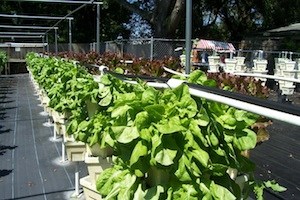 Like the name suggests, the goods produced on this farm are grown hydroponically and, as an added bonus, organically.

This locally sustainable farm is free from toxic pesticides, insecticides, herbicides, hormones, or antibiotics. Owners David and Cathy Hume recognize the importance of growing fresh, local produce and champion the idea of sustainability on their hydroponic farm.

Cathy explains, “Farming is not a profession for someone who is looking to get rich or to have someone else run their business. We are very hands-on in every aspect of the farm and work closely with our farm manager and other employees and volunteers.  We have been fortunate enough to be able to expand our growing capacity and to expand our customer base.”

As a non-traditional farm, a lot of research went into the most beneficial growing methods to complement their urban farm and on-site farm market. The hydroponic growing system was ideal for a farm with limited space, and, as Cathy put it, a “sterile growing environment to reduce soil-born pests and diseases, and urban agricultural use for a ‘non-fertile’ property.”

The growing system utilizes drip irrigation to fertilize plants and has space for up to 90 plants.

Although Hume emphasizes that the farming trade is not an ideal industry for those looking to make easy money, Urban Oasis is profitable and has seen two expansions since its inception in April of 2008.

The Value of Fresh, Seasonal Produce

How far are people willing to travel for organically grown goods? Pretty far, according to the Hume’s.

Customers travel from neighboring towns to get their hands on the local goodness harvested at Urban Oasis and it’s not because of advertising. Instead, Urban Oasis is locally sustained by the locals’ word of mouth.

As Hume explains, “we had been advised by marketing persons to put ads in local newsletters, and we have found that word of mouth is far superior than any print ad.”

In fact, Cathy shared that earlier this week a young couple was driving through and stopped at the farm market. Not long after, Cathy was talking to the mother of the same young man she had met earlier who explained that her son said she had to visit Urban Oasis.

However, consumers aren’t just going to the farm to grab a few handfuls of bok choi. The Hume’s are providing more.

“We do a lot of education,” says Hume.

“Sometimes people assume if it’s coming off the back of a pick-up truck on the side of the road, then it’s local. But that’s not always the case,” she continues.

To be sure, Florida is not exactly on the cutting-edge of worldwide health and wellness trends that first swept the Pacific Northwest or the west coast. But, as of lately, local farmers in Florida have seen increased interest from residents about supporting the local economy.

Hume concurs, adding, “In the last five years, we have seen a significant increase in understanding the food supply issue in this country and general consciousness regarding food.”

“We’re only a couple of generations away from eating locally, but we have gotten away from this, and now I see it coming back,” she says.

The Future of Urban Oasis

As summer fades to fall, Urban Oasis will be preparing for the growing season and planning for fall crop planting.

“We are looking forward to our Fall Farm Share season beginning in early November and an abundant 2013 – 2014 season harvest,” says Hume.