Greens & Gills, LLC Founder David Ellis comes from a long line of entrepreneurs. Both his father and grandfather were independent business owners and he knew he would eventually follow in their footsteps— once the right idea presented itself of course. In Ellis’ case, the right idea came in the form of an urban, indoor agriculture operation using aquaponics.

According to Ellis, inspiration struck when he read about a Milwaukee company converting a vacant industrial space into an indoor, urban farm that would cultivate and sell local, sustainably grown fish and vegetables to the Milwaukee market. He visited the operation and the metaphorical seeds of his new business, Greens & Gills, were sown.

Ellis was drawn to indoor, urban farming as a business model because it merged his entrepreneurial spirit with his desire to make a difference and his passion for science and food. In Ellis’ mind the importance of local food cannot be overstated both in regards to the goals of his business and the future of agriculture as a whole. “We believe that people deserve the best tasting, most nutritious food available to them, and local food production is the bottom line of delivering on that belief,” said Ellis.

Like many other sustainable agriculture entrepreneurs, Ellis focused intently on the ecological viability of his business model. From the outset, he and his two business partners knew they wanted their operation to be “cutting edge” and not just an indoor replica of traditional farming practices. “We are at a time where water, land and other natural resources as they relate to agriculture are becoming more and more scarce,” said Ellis, “That, coupled with the growing population of the world, made us realize that we wanted our agriculture business to somehow incorporate savings of these resources.” 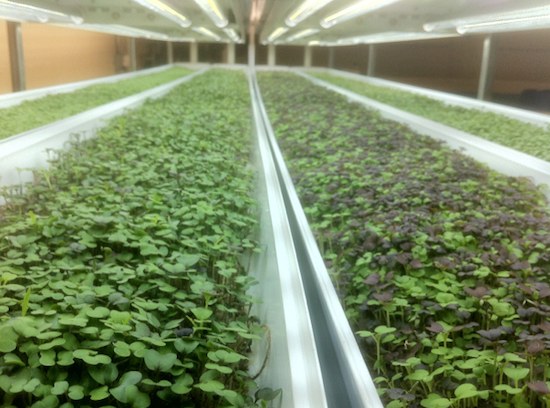 Ellis and his partners decided on an indoor, aquaponic farming system instead of a purely hydroponic system because they wanted to reduce the need for manufactured fertilizers, which are required in hydroponic systems. Furthermore, since an aquaponic system is unable to handle both synthetic and organic forms of pesticides and herbicides, they adopted a pest management system that utilizes predatory bugs to prey on the bugs that are harmful to their crops.

Ellis and his partners were also drawn to the fact that an aquaponic system allowed them to produce two different by-products— fish and vegetables. Greens & Gills raises Tilapia, which is a very resilient fish and a popular choice in aquaponics. According to Ellis, Tilapia are able to withstand the fluctuations in water chemistry that occur during the initial nitrification cycle phase. “For a first time aquaponic farm, we felt it was important to use the easiest fish to raise and prevent catastrophe,” said Ellis.

The crops grown at Greens & Gills all fall into the “leafy greens” category. Specifically, they grow different types of lettuce, arugula, basil varieties, sorrel, kale, and micro greens. They chose to grow this type of crop because aquaponic water has high nitrogen content and these plants thrive in a nitrogen-rich environment. Ellis emphasizes the fact that, although it is possible to grow various types of crops in an aquaponic system, they wanted to start simply to ensure success. “We just thought it would be best to focus on one category and not over complicate things at first,” said Ellis. “The leafy greens have a much faster turnover rate, so the economic factor weighed in on that decision as well.”

In organizing the logistics of their aquaponic system, Ellis and his partners thought it was important not to “reinvent the wheel.” Instead, they opted for an “out of the box” aquaponic system through Nelson and Pade, Inc. They felt this was the safest approach for a start-up operation. “In creating a baseline business model, we felt ours would be less assumptive if we worked with systems that were proven and had numbers to back them,” said Ellis.

Despite taking this somewhat safer approach, they were still hesitant to accept money from investors until they had proven the viability of the system themselves. “We felt it important to invest our own capital into proving that the systems could grow the volume of product we were told they could grow before we ever thought about taking other peoples’ money and experimenting with vetting out those production numbers,” said Ellis.

After passing the Chicago Department of Public Health licensing inspection in December 2012, Greens & Gills became one of the first licensed aquaponic farms in the city of Chicago. Like most young start-ups, they are still in a growth phase as they gradually increase production to full capacity and take their product to market. “Our primary distribution channel is selling direct to restaurants, and we are also starting to talk to food distributors about purchasing our produce and delivering to their built-in client base,” said Ellis.

Like any other agricultural operation, Greens & Gills faces fairly typical challenges, particularly reducing the chance of crop failure and balancing an increase in production with the ability to sell everything they grow. That being said, Ellis is optimistic about the future of his aquaponic operation. “We believe the future is bright. Once we consistently market and sell through our full-capacity production at our current scale, we would like to look at serious scaling up of the model here in Chicago and replication to other urban markets.”