“We believe the next wars are going to be over food and water. So who better to train than our military in water conservation and food production?” – Karen Archipley

Returning military often find themselves struggling to return to normality after serving overseas. Colin Archipley, co-owner of Archi’s Acres in Escondido, CA knows exactly how they feel. He served three tours of duty during the Iraq War that began in 2003. Between his second and third deployment, Colin, along with his wife Karen, bought an inefficiently run avocado farm. Besides starting their own very successful living basil hydroponics farm on the site, the empathetic couple created an incubator for transitioning veterans. What they created became known as the Veterans Sustainable Agriculture Training or VSAT program, a way to help veterans train for self-employment in the peaceful profession of hydroponic farming.

Courses on the VSAT program, that began in 2007, are pretty intensive, according to Karen Archipley. Six weeks long, the classes are administered by the California State University San Marcos’ Extended Learning folks. There is a lot of classroom education with visits from industry players and the sharing of success stories to help students feel motivated. The program’s focus is on training people for the transition from military to civilian life. The courses are open to civilians as well as veterans giving everyone a way to serve their local community while building a sustainable business that will support their family.

“The training in the military is a precursor to self-employment. Because you are taught to think outside the box, to adapt and overcome; you are taught to persevere no matter what,” states Archipley. “How much more perfect for self-employment could you get? What we try to do is give them a way to make a living…so they are not at the mercy of the government. We just want to see people independent and whole.”

Veterans in the VSAT program learn all about hydroponics, farm management, food safety, greenhouse production and all the major aspects of sustainable agriculture. The Archipleys are only too happy to share the many success stories of their graduates, several of whom actually work full time on the farm. 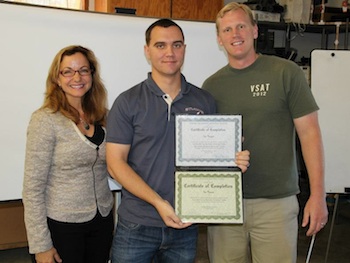 Karen and Colin Archipley with a graduate of the Veterans for Sustainable Agriculture Training program (VSAT). Photo Credit: Archi’s Acres.

Mike Hanes was a survivalist, ex military recon marine and had a desire to start his own business. He completed the very first offering of the VSAT program, created his own line of super food based hot sauces and now sells “Forager Mike’s Superfoods” to Whole Foods Market and Sunfood Nutrition. “He actually just teamed up with another VSAT graduate that’s doing a lot of the business stuff now because business wasn’t his forte. Now he can be more the creator which is where he’s the happiest,” shares Archipley.

A former combat marine and fan of heirloom tomatoes, Jerome Yoskovits began his own organic ketchup company after graduating from the VSAT program. “He was an electrician in the war,” explains Karen. “He came back to the States and became an electrician and he felt kinda trapped in his job so he started growing tomatoes. He started making ketchup. His girlfriend read about our program and he took time off from his employment, took our program and at the end of that he is today in Whole Foods Market. That is so exciting.” Kaught up Ketchup is also available to purchase online.

Former MSNBC journalist and host Dylan Ratigan resigned his television career after interviewing the Archipleys, moved to southern California and now works on the farm four days a week. After assisting in the expansion of their greenhouse program, Ratigan began work on the expansion of the VSAT program. The intention is to use the VSAT program as the model for similar programs across the country.

Karen Archipley shares stories about the VSAT graduates and partners as though she is talking about old friends and her own family. Karen and Colin are proud of the students and excited to keep the program going so they can tell more and more tales of military might turned into sustainable success.

The intensive course in organic farming and business management costs $4500 and includes 240 hours of teaching and 30 hours of job training. Completion brings with it food safety certification, certification from California State University San Marcos, VSAT program certification and the tools to start your own agriculture based business. There are numerous funding opportunities to help veterans pay for the course as well as assistance in starting a business. Colin and Karen offer graduates access to their rich contacts in the field to help them find their niche. At the time of printing, 200 veterans have graduated from the Archi’s Acres VSAT program.

Besides training veterans to be farmers through their VSAT program, the Archipleys intend to employ graduates at their new greenhouses beginning to go up around the country. “In some cases veterans will go on to own those locations and in some cases it will be for those people who really just want to work for someone else and don’t want to have the responsibility of owning it. That way, whatever that person’s ambition is, we’re gonna fit them with that right opportunity,” explains Archipley.

The VSAT greenhouse project will be funded using grants, loans and investor donations for the first five years of operation. After that time, graduates and farm managers will have the opportunity to refinance the greenhouse after they have a strong client base. As Archipley explains, this means they will not take on the original debt and can use startup funding to assist them in becoming owners. The USDA Farm Service Agency is partnering with Archi’s Acres in this expansion of the farm and the VSAT project.

The Disabled American Veterans organization has been instrumental in assisting the VSAT program. They provide tuition assistance and aid to disabled veterans in the program. Its all about contact sharing, partnerships and supporting your fellow farmer in the world of sustainable agriculture and it seems as though the folks at Archi’s Acres have turned it into a very fruitful art form.

Anyone can help the transitioning military become farmers through the Veteran Valor Fund. The fund is a non profit that provides VSAT program graduates with low interest business startup loans.