“We wanted something that was sustainable, but was a really good deal for the customer. We call it bioponic. That means we use all organic practices. We have a definite crop production and we are always sold out.” – Karen Archipley 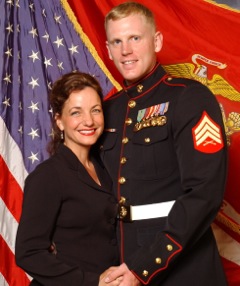 While deployed in Iraq, Colin Archipley used his down time to work on the avocado farm he and his wife Karen bought back in 2006. “His whole mission was to save our farm,” remembers Karen. The farm was purchased between Colin’s second and third assignment in Iraq. When he wasn’t out battling the tension in Haditha, Colin was on the phone figuring out how to make his farm successful. The desire to make a positive lasting difference in the world was hampered by outrageous San Diego water rates. They had to find a way to reduce their $845 water bill and make their farm efficient and sustainable. A switch to bio hydroponic agriculture, a change of main product and the luck of partnering with some big names in the world of organic food and Archi’s Acres was well on its way.

The Archipleys embraced an organic lifestyle long before they became farmers, which Karen believes made their transition into the organic produce market much smoother. “I think sustainable agriculture is the only way it can be because if we continue to do the monoculture there is no way it will work,” shares Archipley. “I’m no fan of GMO….I don’t know if its bad for you, but I’m not willing to be an experiment.”

It was famed buyer Don Nishiguchi of Whole Foods Market, one of Archi’s Acres very first customers that suggested they make living basil their signature crop. It was great advice from a fortunate early partner and the Archi’s Acres hydroponically grown organic living basil is now poised to enter the national market. They have expanded their business utilizing the Whole Foods Local Producers Loan program and will be using the funds to build three new greenhouses; in Boston, San Bernardino and on their original farm in north Escondido. Karen and Colin took out a second mortgage on their home to fund their very first 30′ x 60′ hydroponic greenhouse.

“We’re really into the local food movement and making sure people have access. We are building greenhouses so we can have a national branding with a local footprint,” explains Karen happily. “We have created opportunities where we can employ transitioning military into those farms where every job on the farm creates 2.7 in the surrounding community. We have greenhouses that employ ten people so that will equate to 27 jobs outside of that farm.”

Archi’s Acres utilizes a standard Australian hydroponic system (purchased locally) that they customized to get the right size channels for their basil crop. In fact, they are now producing their own stackable channels for the hydroponic equipment market. Archi’s Acres channels are made from polyethylene. Usually the channels are made from an oil byproduct polypropylene. Archipley’s channels will eventually decompose but are hardy enough to sustain their owners for many years of growing, reducing overall equipment costs. The Polyethylene channels eliminate the possibility of chemical breakdown and subsequent leaching of oil products into the produce.

Sustainable practices on the farm include staying local to reduce the carbon footprint, water conservation and composting for their ground crops. A recent installation of solar panels will reduce electricity costs. The farm produces its own compost tea to add nutrients to their crops, the ingredients of which they are trying to standardize in order to use it on their avocado trees across the country in the future.

A major challenge for the farm’s outside crops is the erratic weather patterns the globe has experienced in recent years. “That’s making things like crop insurance so much more important,” states Archipley. This year’s farm bill, if it passes as written, includes the allowance of crop insurance for smaller growers. “As the weather starts changing…you are finding different issues with crops that you don’t normally have because when the weather in California turns to Florida…but we also found that this was an opportunity because when you confront that we are in a much better position for when we roll out across the country,” shares Archipley. “We turn obstacles into opportunities and knowledge we can use in other areas.”

Becoming a major partner with the farm is former MSNBC journalist Dylan Ratigan, who decided to start hydroponic farming after an interview with Colin and Karen Archipley. Colin challenged Ratigan to do more and so he did. After the interview, Ratigan left his television job, sold his apartment and became a farmer. He actually works at Archi’s Acres four days a week and has become instrumental in the logistical planning (along with a former major general) of the nationwide greenhouse expansion.

Despite the hydroponic gold dust that living basil has been for the Archipleys, they still farm 160 of their original 200 avocado trees. In tandem with their main producers, they grow kale, chard and bok choy along with a few other seasonal fruits and vegetables. “As other crops become more scarce we’ll add them into our repertoire,” shares Archipley. Archi’s Acres enjoys both ends of the organic produce market selling to several organic retailers as well as at the local farmer’s market every weekend.

Water is one of the bigger expenses for California growers. “When you grow hydroponically you are using up to 90 percent less water. If you are growing basil in the ground you’ll have seven crop turns per year. When you grow hydroponically, you have 17,” states Archipley. “So the difference between struggling and really making it in a farm, its a big deal.” In today’s prices, the first Archi’s Acres water bill when they were farming traditionally was approximately $1800. Their actual water bill is $246 per month. What a difference a hydroponic greenhouse can make.

Their farm manager only left the military four months ago, but joins two other VSAT graduates in the day to day running of the business. Archi’s Acres has grown from risk and empathy into a Whole Foods staple. In fact, they just finished assisting the first lady and her daughters in the planting of the White House vegetable garden. When it comes to success and Karen and Colin Archipley, it looks as though service to country and community really does pay off.

And Karen’s final words of wisdom for would be sustainable growers? “Go for it. Follow you dream. Don’t let anybody tell you can’t do it. Our school is open to veterans and civilians and with just a little bit of direction and a good network, there’s nothing you can’t do,” concludes Archipley.