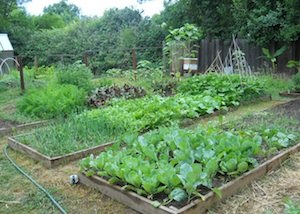 As a culture we have become so disconnected from our food. The sustainable agriculture movement is making strides to rectify the matter, but there is so much work still to be done. For those living in the inner cities, access to organic local food is even more difficult with few neighborhood outlets for healthy produce. That’s why the work of urban farmer, Chanowk Yisrael and the Yisrael Family Farm is one step closer to local access of fresh fruits, vegetables and honey for the folks of the Oak Park community in Sacramento.

The Yisrael family farm began in 2007 when Yisrael started to look at the economic fear that was mounting across the globe. “I’m sitting in my cubicle… and at that point there was a lot of fear mongering going on. You know: ‘everything is going to crash,’ ‘it’s the Great Depression Part 2,’ ‘we only have 60 days left,’ ‘run for the hills,’ that type of stuff,” remembers Yisrael. “So I started to ponder: imagine if that type of scenario did happen what would I do? What would I be able to do? How would I be able to take care of myself? How would I be able to take care of family? Even though I had all this knowledge about computers and you know, I was making computer money and what have you, I came up with a blank. It was at that point that I decided to start growing food for the family.” Yisrael is far from a survivalist, but terms himself and his business as “urban homesteading,” a lifestyle that sustains his family and aids his neighborhood.

A large part of the Yisrael Family Farm approach is community outreach. Living in what Yisrael describes as a “food desert,” bringing fresh food and self-sustaining practices to the community of Oak Park has played a large role in the success of the farm. They offer classes, opportunities to volunteer, tours, gatherings and urban agriculture-based dialog to help community members replicate their practices and understand the importance of eating fresh produce.

This oasis of urban agriculture uses a number of sustainable practices including raised bed planting, drip irrigation, composting, cover crops and crop rotation. Yisrael favors wheat as a cover crop when establishing a new raised bed. The work on the farm is done without machinery and double digging is a favorite technique; easy to share with volunteers and guests. Yisrael likes to experiment with different planting techniques and has enjoyed success with permaculture, bio-intensive planting, biodynamic planting and indigenous techniques such as the Three Sisters companion planting method.

Growing a balanced diet of fresh food that accounts for daily, weekly and monthly vegetable and fruit intake is the concept behind the Yisrael Family Farm produce choices. They grow a variety of greens, tomatoes, squashes, zucchini, several varieties of kale, potatoes, onions and seasonal fruits. Yisrael also raises chickens for fresh eggs and has a number of beehives on his property for the propagation of honey.

The goal is a completely closed system utilizing sustainable techniques that produce enough food to feed the immediate family, but also provide for the community. Still in its startup stage, Yisrael Family Farm is considering Lc3 status so they can not only sell food to the local community, but become involved in charitable giving on a larger scale. Right now, a vast majority of the food is simply given away.

For most small growers “profitable” is a term defined by the ability to grow again the next year without carrying a lot of rotating debt. For Yisrael, profit is a social endeavor based on the historic understanding of the urban farmer. “The success for the farmer back then before we started to use things like ‘money,’ ‘profit and loss’ and all these accounting terms was not only that you might be able to make money if people come and buy, but what’s the impact that I’m making with what I’m providing to people and in that case its very profitable,” explains Yisrael.

It wasn’t until 2011 that Yisrael Family Farm began publicizing their efforts and formalizing their production. Their first experience with a farm stand was a lesson in food desert living. “I can’t say it was a total success,” shares Yisrael. “We were there, we were able to provide the access to the food and we did make some sales, but what we’re finding especially in places like the inner city is the health habits are much different. We were in a parking lot with Louisiana fried chicken, slurpies, doughnuts etc. We were not able to really get a whole bunch of business because there has to be an educational piece that goes along with it.”

The second Sunday of every month is volunteer day at the Yisrael Family Farm. As explained on their website, the volunteer days not only help cultivate the produce, “Volunteer days are our way of bringing people together from a wide range of backgrounds in order to demonstrate that when we work together, we can change transform the hood for GOOD!” Each volunteer day sees 25-30 people giving up a large portion of their day off to work on the farm and enjoy the vegetarian potluck meal. Yisrael wants to do more than just grow fresh food. He wants to awaken his community to the possibilities of sustainable agriculture on their doorstep.

“You can employ people, veterans, you can take people out of the community and be able to give them some meaningful work to do as well as serve their community, especially in an inner city. You’ve got soup kitchens, you’ve got food handouts and things of that nature and at the same time you’ve got schools closing down,” shares Yisrael. “Why not take some of those schools and use the land that the school has and grow something on there? You can get the community involved. You can open up the soup kitchen where they do not have to get free food from anywhere and the people that were once coming to the soup kitchen can now be the people managing the soup kitchens with food that they all helped grow. Urban agriculture can serve those needs.”

Future plans include a stall at the local farmer’s market and creating their own CSA. Yisrael would also like to bring in more speakers from the sustainable agriculture community to educate his neighbors and customers. He hopes to collaborate with local schools and restaurants on composting food scraps and is currently building a relationship with the local library to include their garden in their busy schedule. A paid intern is hoped for that would not only give a local student an income, but teach them about sustainable agriculture. What started as a veggie patch for the immediate family has become an exercise in community building. As Yisrael explains, urban homesteading is not a new concept and he can only hope more people in his community realize the potential of the ‘grow your own’ way of life.