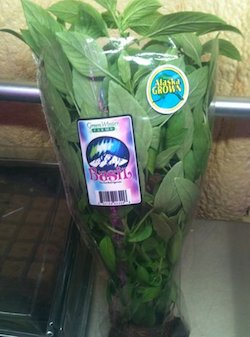 What does a sustainable-minded farmer grow in Alaska where the average mean temperature is less than 30 degrees Fahrenheit most of the year? If you are Christopher and Crystal Boze at Green Winter Farms of Palmer, Alaska (about 45 minutes north of Anchorage), the answer would be basil – grown in a 40-foot-long shipping container and a 500-square-foot metal building called “the Space Station.”

“Normally, the earliest outside planting date around here is May 31st,” Crystal Boze said. “And by mid-September, everything’s gone or frozen.”

Boze and her husband quit their day jobs and launched Green Winter Farms three years ago. Their hydroponic system, set up in less than 1000 square feet of growing space, and warmed with LED grow lights, is astonishingly fertile – their yield of about 1.7 pounds per square foot of basil provides 14 local grocery stores, seasonal farmers markets and one local restaurant year-round with fresh basil.

Nearly all produce Alaskans consume is flown in, raising the cost of healthy eating and severely upping the carbon impact of the food system. Plus, most of the food has lost its nutritional value by the time it lands on an Alaskan plate, so that most people have no idea what a fresh tomato really tastes like. 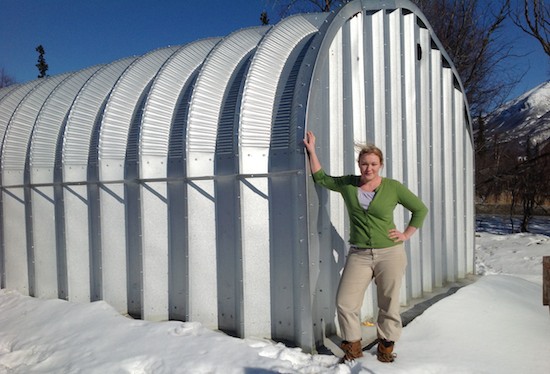 Crystal Boze of Green Winter Farms standing outside the 40-foot-long, 500-square-foot shipping container called “the Space Station” in which the Alaska-based farm grows its basil.

The Bozes wanted to see if they could change the paradigm a little. Crystal had attended State University of New York at Cobleskill, an agricultural and technical school, and learned to grow tomatoes hydroponically in her laundry room. She figured the same could be done in Palmer.

She could and did. Spectacularly well. The Bozes grow more than 400 pounds of basil a month, year-round. Their success – crop sell-out monthly – convinced them to expand their home operations. They made plans to set up a “Hydro-Dome,” an 800-squre-foot growing space that will triple their capacity and allow them to introduce now varieties to their crop offerings.

“Everyone is asking us to do more herbs like mint and cilantro,” Boze said. “We sell out of everything we grow and personally distribute all our stuff to the local stores.”

The Bozes will use the same hydroponic production methods that have worked for them so far with LED lighting and a carbon neutral, biomass combustion boiler to keep the dome warm in the winter. With 100 mile-per-hour winds common in the colder months, the dome’s minimal surface area and aerodynamic form is ideal to ride out the wild Alaskan winters.

The key to such expansion, of course, is funding. So the Bozes turned to a Kickstarter campaign that runs till the end of May. They are looking to raise enough funds to have the Hydro-Dome in place by August.

“We’ve already purchased a lot of the material and plan to do a lot of the construction ourselves,” Boze said. “It’s tricky, because we had a really wet winter and now we have to wait for the ground to dry before we pour concrete. But we want to finish this summer and start growing.”

Crowdfunding platforms like Indiegogo and Kickstarter have become a hot source for quick capital fundraising of many a diverse project. Dresden Dolls singer Amanda Palmer was looking to raise $100,000 for her 2012 album “Theatre is Evil;” she was rewarded with a whopping $1.2 million from her fans. Green Winter Farms’ goals are more modest: $26,000.

Unfortunately, Alaskans are not, as Boze said, “particularly savvy” about Kickstarter. Their pledges so far amount to less than $1,000. But the Bozes are determined “come hell or high water” to build their Hydro-Dome.

Their resolve is not flight of fancy. With two children under the age of five, the Bozes still manage a farm that includes the commercial growing setup, as well as raised beds (during the summer) full of strawberries, lettuce and dill (fenced off from roaming moose and bear), milk goats, miniature pigs, chickens and ducks. They know from farming.

Boze would like to compost, but she said, “Nothing really breaks down here. It’s just too cold.”

Their next venture, in conjunction with the Hydro-Dome, is to move into aquaponics – raising tilapia or catfish to provide nutritionally dense water for their crops. It’s a move that makes sense with Chris’ fishery background. Such expansion will also allow them to hire staff full-time, contributing to the local economy.

The Boze children help label on packing days and Crystal’s mom and grandma keep an eye on everyone during production. Boze said that they make a far better living now than when Chris was working at a hotel and the family is happier.