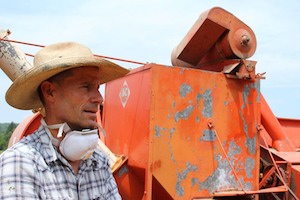 Lucky Dog Organics harvested 7200 bushels of Arapahoe wheat last season. Though the farm is in the Catskills, the crop has roots across the country, in the frustrations of one particular eater.

“I was living in Pasadena, and I couldn’t buy a decent loaf of bread without an effort,” said Michael O’Malley, an artist who teaches in California and has a farm near Lucky Dog. To answer the bread problem, he decided to teach himself to bake. A sculptor, his interest in bread bled into his art, and some installations that involved baking bread.

“I always bake two loaves and give one away so it serves as this kind of bridge between myself and the people who are part of my life,” said O’Malley. This bridge stretched to Lucky Dog while he was on sabbatical a couple of years ago, when realized he needed to learn more about wheat. He bought a combine on Craig’s List, and started talking to his friend, farmer Richard Giles.

“Michael and I, our approaches are so different. To come back to grains with his insight is nice,” said Giles, who farmed commodity grains in eastern Mississippi and western Alabama.

The wheat berries and flour Lucky Dog is now selling retail, and to restaurants, bakers, and pasta makers are not anonymous ingredients. They more resemble the vegetables that are the mainstay of the farm: foods people seek for their freshness, nutritional value, local cache, and perhaps most importantly, flavor.

Giles was already planting rye as a winter cover crop, but managing 40-50 varieties of vegetables in the summer kept him from doing much but tilling the plants under. Occasionally he harvested seed for fall planting, but O’Malley made this project possible.

What began as a shared interest between friends is helping the farm in terms of economic diversification, and helping the regional grain movement gain ground. The grains and flour are reaching customers locally at the farm’s store and café, and fanning out across the state. This matters to consumers, who are able to get access to local grains late in the locavore craze. It also matters to chefs, who are fully embracing the tasty potential of grains.

Austin Hall of Roman’s Bakery bakes for Andrew Tarlow’s family of restaurants in New York City, and is very pleased with the miche loaves he’s made from Lucky Dog’s flour. Custom milled by Farmer Ground Flour, this is a high extraction, or half white type preferred by artisan bakers because much of the bran is removed while the flavorful germ remains in tact; bran interferes with the formation of bread dough’s gluten networks.

Hall sees the availability of this and other local flour as evidence of how the infrastructure for grain production has expanded in New York State. Organizations like OGRIN, the Organic Research and Information Sharing Network, have been working toward this goal and are happy Lucky Dog grains are on the market. Their OREI funded value-added grains for local and regional food systems grant explored the prospects for projects just like this.

The success is also satisfying to June Russell from the Greenmarket Regional Grain Project. Lucky Dog is a vendor at NYC farmers markets run by Greenmarket. Russell sees Lucky Dog’s expansion into grains as a good example for other small farms seeking prospective value added projects. Similar enterprises will also have another intrinsic benefit, in terms of plant and soil health.

Grain rotations help break up disease cycles because grasses are in different families from vegetables, easing stress from pests, funguses and other threats. Grains also build organic matter in the soil. However, adding another crop with a whole different harvest and handling scheme is tricky for vegetable farmers.

Having an off-farm partner is the key at Lucky Dog, and a model for small vegetable operations, particularly those in the Hudson Valley and Catskills. Serving New York City’s 8 million eaters, and sometimes working small parcels intensively, these farms could really give their soil the break that grasses allow.

The nitty gritty of the partnership is this: O’Malley has both put muscle and time into the project, planting, harvesting, and getting an old grain bin ready to hold the crop in the barn. Over the winter they bought their first shared piece of equipment, a Clipper seed cleaner, and are considering adding a mill, too.

“I think that we would both like this venture to be rewarded with sales, but it’s also about creating culture, demand, awareness, and maybe even some more grain growers,” said O’Malley.

Farmers are already curious. Walter Riesen of nearby Star Route Farm grows grains for OGRIN on an experimental basis, and to see what varieties suit his microclimate so he can work them into his vegetable rotations. Lucky Dog’s efforts function for him just as June Russell supposes, as a model of farm diversity at work.

The possibility of urging other, conventional farmers away from corn production for ethanol and hay for dairies, and encouraging beginning farmers to grow grains, is exciting to both Giles and O’Malley. The area has a history of supplying New York City with food, and that capacity is ripe to be regenerated.