Not many restaurateurs would commit to building their own aquaponics system in the basement of their restaurant. But Anton Kotar, owner of Anton’s Taproom in Kansas City, Mo., had experience raising tropical fish and tending plants in his home so he knew he could make the sustainable, aquaponic-restaurant concept work.

Anton’s Taproom opened in October 2012, and started serving food on November 1. And Kotar worked on the space, renovating the historic building and constructing fish tanks, 14 months before opening. Since opening, the restaurant has seen a lot of success, and the restaurant’s aquaponic and vertical farm system are running swimmingly.

I recently spoke with Kotar about his new, restaurant concept, what he’s growing and who else in the business is working with aquaponics.

Seedstock: What do you grow for the restaurant in your aquaponic system?

Anton Kotar: Basil, chives, and oregano. We pull it out and we transplant other stuff in there and that depends on the menu. Downstairs, I have this vertical wall that we do some testing in. It’s just PVC tubes on the wall. We pump the water from the tanks over there. I have a connection with some PVC pipe. And we pump the water over there to see how those guys are going to do. And we record their progress and it allows us to choose where to grow things.

We are still raising the amount of tilapia we need to sustain life in the restaurant. I think I’ll be able to hold about 1,200 tilapia downstairs in a year’s time. We have about 600 on hand right now. I’ve got about 400 more babies at the house and out of that 400, I get about 80 usable tilapia. The reason we get so little is that the ratio is like 50/50 male/female. The females don’t grow big enough to really use. But in the commercial operations, they use them all, except they change the sex by adding hormones to the water and chemicals. We definitely do not believe in that. 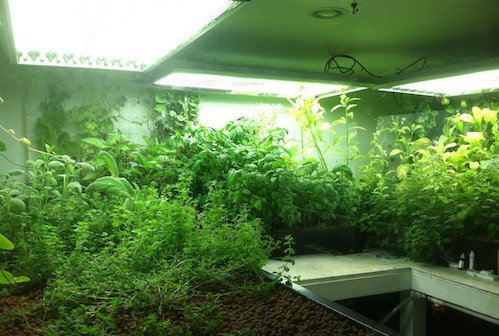 This aquaponic system in the basement of Anton’s Taproom in Kansas City, Mo. provides the restaurant with basil and an assortment of herbs. Photo: Anton’s Taproom.

Seedstock: How did you build your aquaponic system?

Anton Kotar: It was very simple coming up with the parts, and I could build. My tanks are wood with pond liner [able to adequately house fish] inside of them. It’s easier to clean and manage that way. I could build the system to squeeze into every crick and crevice in the building. I was able to design the tanks to fit. I did search around for stuff, but I couldn’t find anything that would fit and not waste space. I was trying to get as much volume as I could. I researched aquaponics and tilapia because I thought that hydroponics just never hit the mark. The produce is good and it’s better than normal, but it doesn’t have that earthiness that a lot of produce needs.

Seedstock: Do you know of any other restaurants that do this?

Anton Kotar: Not at all. There are some who are trying rooftop stuff without the tilapia tanks and just doing some hydroponics growing. And the health department — when I applied for my permits — I asked them to come in and give me some preliminary inspections. They took two days and put it on [the restaurant concept] the national health forum and got no response. Not one other health department in the country knew what to tell them to do about it. They are going to come in and do a short film of me talking about it and how it works.

Seedstock: Have you always strived to grow food sustainably and eat local?

Anton Kotar: I was already eating as much organic food as I could. My little boy’s mom is adamant about making sure her children eat right. Also, at the time, I had been traveling the country, going to steak houses and experimenting with beef. I believe that the best steak you can buy is a grass-fed piece of beef over grain-fed. And it should be something local. I hate the idea of the local farmers going away. The butcher shop was necessary because if you’re going to do steaks, you’ve got to keep it competitive. The whole sustainable thing was there, and the farmers coming by is my way of trying to keep them in business because once they are gone, where are we going to get our food source from? Then we are stuck with the Monsantos of the world.