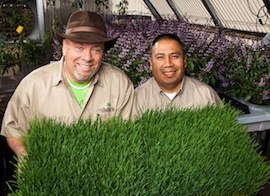 Five years ago Mark Rhine and his business partner Marlo Ibanez, co-owners of Rhibafarms, had a broadband company in Phoenix, Arizona. They fielded a $225,000 a month payroll, traveled constantly and ate junk food only as an afterthought. Then they cashed in their company, bought a farm – Rhibafarms – and saw their health turn 180 degrees.

“We both lost a ton of weight, lowered our blood pressure and cholesterol and stopped taking medication,” Rhine said. “All because we started eating the organic food we grow. So all we want to grow now is very nutrient-dense food.”

It wasn’t just healthy eating. Rhine and Ibanez, who had no previous farming experience, threw themselves into the process of learning to turn the clayish, sun baked, depleted soil of Phoenix, Arizona (farmland had been extensively destroyed by decades of chemical fertilizers) into a composted, nutrient-rich environment for healthful growing practices. There was a learning curve.

With the popularity of juice bars proliferating, they started with wheatgrass. It went well. They moved into aquaponics, raising tons of fresh vegetables to distribute through farmers markets, local restaurants and CSA drop offs. They got some chickens. And with each step of farm development, they tried to incorporate recycling practices into production.

Accordingly, the tilapia that drives their aquaponic system nourishes the water fed to crops and is in turn nourished by the leftover leafy veggies. The chickens provide rich fertilizer for their composting system and are in turn fed by the crops they feed. Rhine even raises black soldier flies to “take care of the garbage problem” and the insects provide him with larva to feed the chickens. 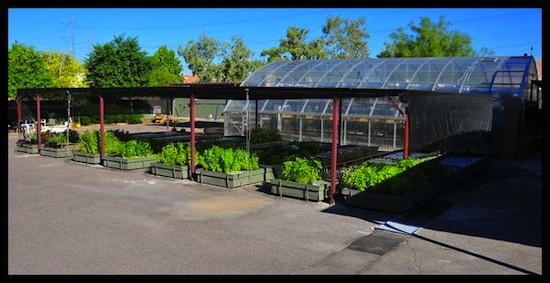 “We need to re-educate the world about organizing our waste,” Rhine said. “Nature has so much to offer that we can recycle. I mean, there is no ‘away’ in ‘throw away.’ We don’t want it going into a landfill, so we reuse all our waste.”

Rhine acknowledged that farming is not a get-rich-quick venture. Economies of scale must be achieved to find real profitability in growing food. But Rhine loves the challenge. His business background helps considerably and he has found innovative ways to accommodate state and federal regulatory authorities that can present some obstacles.

Rhibafarms recently launched an “Adopt a Chicken” program. Interested parties pay for a chicken’s room and board and, in return, they are awarded with fresh eggs in weekly drop offs. You can scroll through a gallery of feathered friends on their website to get started on the adoption process. Such a system allows Rhine to work with restrictive local regulations on chicken husbandry and satisfies a customer base that can never seem to get enough eggs.

“My whole challenge is growing enough food,” Rhine said. “We sell out of everything we grow – basil, bok choy, beets, corn, artichokes. Even kale. No one even knew what kale was before Dr. Oz and Oprah.”

Rhine said that Arizona agricultural regulation doesn’t make it easy for small farmers, noting that big chemical companies like Monsanto have a strong presence on Arizona university campuses. He said he would like to render his farm carbon-neutral with solar energy, but efficient solar paneling installers don’t have much of a presence in the state yet.

“Our whole state is built on consuming,” he lamented.

But he noted that even environmentally conscious groups often do more to hurt than help their cause. When he and Ibanez wanted to learn about aquaponics, there were only two sources for training – in the Virgin Islands and in Hawaii.

“You’d think that they would really be spreading the technology, but they hold onto it,” Rhine said a little impatiently. “This is farming that doesn’t just take, take, take. Even the University of Arizona, which is a land-grant school, won’t promote aquaponics here.”

Nevertheless, Rhine is expanding his aquaponic system and improving the vortexing water flow. He plants by moon cycles and swears it pays off. He shuns any kind of chemical fertilizer and bemoans “the chemicals that pour out of the tap water here.” He studiously follows a seasonal planting schedule and shakes his head over people who insist on looking for raspberries in December.

“If we don’t have a paradigm shift in the way we eat and realize that the earth provides certain food at the right time, we’re screwed,” he said.

Rhibafarms also keeps an eye out for nutrient-dense sources of food that are not usually part of an American diet. Rhine’s latest discovery is the Moringa tree, which he calls “the tree of life,” and which he has incorporated into his crop rotation big time.

“A couple of kids from Kenya on one of our farm tours told us about it,” Rhine said. “It’s a low-water tree that loves the heat and you can utilize almost all of it. The leaves taste like broccoli, the seeds are nutritious. You can make a tea out of it. If one Moringa tree in Kenya can feed a whole village, think of what a thousand trees can feed!”

Thinking Past Yourself: Farm Succession Planning