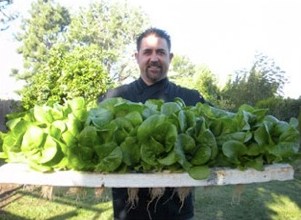 Every small grower likes to find ways to reduce costs and cut out the middle man but Adam Navidi of Future Foods Farms and Green to Go has turned organic growing and serving his clientele into a planet friendly fine art. He grows a wide range of organic produce through the aquaponic systems on his farm. The produce is then sold at his restaurant. The restaurant scraps in turn are used to feed the fish on his farm. This sustainable circuit of good is developed from a combination of creative thinking, hard work and a passion for good food.

“As a chef that owns a catering company and a restaurant, I wanted to be able to provide my clients with the best produce possible. For a chef there is no better way for being in tune with your food than to grow it yourself,” explains Navidi. Future Foods Farms, the largest aquaponic farm in Southern California, sits on 25 acres of open country and began in earnest back in 2008. Comprised of ten large greenhouses, Future Foods Farms is home to a varied assortment of fruit and vegetables not to mention hundreds of tilapia fish. Vegetarian fish fed on California organic brown rice no less.

A graduate of the Culinary Institute and recipient of the 2005 Milk Advisory Board ‘Chef of the Year’ award, Adam Navidi has been cooking since he was 15. After years of building his culinary resume and working with some of the world’s greatest chefs, Navidi began his own catering company in 1998 serving world leaders and movie stars alike. When his favorite chef Jean Louis Palladin advised him that a great chef knew where his ingredients came from, the local, organic and fresh food spark was ignited.

Navidi started his own operation in vertical hydroponics, but found the aquaponic route was much more efficient. What better way to prove your produce is truly organic and free of chemicals than through the aquaponic method? Because of the sensitivity of fish to changes in their environment absolutely no contaminants can enter the water. For those unfamiliar aquaponic systems utilize pump systems to cycle water from fish tanks to grow beds and back again in a continuous cycle. This provides aerated water for the fish and essential nutrients to the plants.

An aquaponic system in one of the greenhouses at Future Foods Farms.

Navidi believes in tailoring aquaponics to meet your specific growing needs. “Back in the day when I first started doing this there was nobody doing this thing; very, very few. There wasn’t that many kits or things out there so I just started reusing things that I found,” states Navidi. “A lot of our systems are built out of reclaimed items. There are very few things that we actually go out and buy.” His first successful system was comprised of an old restaurant salad bar and a standard fish aquarium.

“You learn best by going and seeing what other people are doing. A lot of places want to sell you classes or sell you a system. I don’t want to build people’s system for them, I want them to come out and look at my system and say: ‘hey I can do that.’ There’s a lot of inefficiency out there; the only way to do it is hands on,” shares Navidi.

Navidi has a penchant for salads and grows mostly vegetables and micro greens. Plants grown using the aquaponic system are said to be bigger and healthier than their traditionally grown counterparts. This is demonstrated by the abundance of produce on display during the weekly tours and tastings held at Future Foods Farms.

Eating freshly prepared hors d’oeuvres at the farm is a one of a kind experience filled with ambient lighting, vegetarian fish floating by, beautiful greenery and the talents of a top chef table side. Navidi utilizes his culinary skills to remind his guests about the beauty of eating local organic produce at its freshest. The farm offers tours of the facility before dinner to help people really understand where their food comes from. The farm also produces honey from its 150 beehives.

The farm produce is sold throughout Orange County at local restaurants and farmers markets, through a produce company, through the farm’s CSA service and of course at the Green to Go restaurant. Located inside a local shopping center, the Green to Go restaurant promotes local farmers, serves only organic food, and as a partner and head chef, provides Navidi with a place to share his passion for good food with a larger audience in a mainstream setting. “It’s all about healthy fast casual food,” explains Navidi. “I think we’re doing it better than anyone else out there.” Organic ingredients as well as nutrient dense meals are available to the customers. The restaurant includes a store for buying raw ingredients.

A lot of folks don’t realize that a big part of aquaponics is water conservation. Navidi explains: “The nursery we took over was almost 55 acres and their water bill was like $6,000 a month; ours is $60 a month.” In traditional in-ground growing it takes approximately 15 gallons of water to grow a full size lettuce. In aquaponic farming, that same lettuce can be grown using one gallon of water.

Grower and chef Navidi hates waste and loves to find ways to reuse and reduce in business. This began with recycling the greenhouse framework from the former nursery that once inhabited his farmland to turning storage boxes into plant pots. Styrofoam boxes that clog landfills for millennia arrive at Green to Go daily filled with fresh produce for the restaurant. Navidi took the empty Styrofoam back to his farm to use as grow boxes keeping them out of the landfill, upcyling and saving money all at the same time.

Waste high grow tables, weedless beds and less weather related stress are just a few reasons why aquaponic farming is tempting more and more small growers. Navidi hopes to expand his farm and open more restaurants like Green to Go so his message of conservation and food appreciation can continue to spread; and of course keep supplying his successful catering company with freshly grown produce. For Navidi and sustainable aquaponic farming, the future never looked brighter.

Thinking Past Yourself: Farm Succession Planning