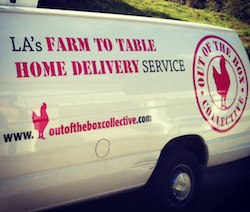 Jennifer Piette said the idea for her Out of the Box Collective was born from the European food culture in which she lived for more than 20 years, working as a screenwriter and film producer.

“Where I lived (in France, Portugal and England), there were fresh markets right around the corner,” Piette said. “You cooked. Here in America, we have a completely different relationship with our food.”

Piette was referring to modern-day proclivities for processed and packaged meals (Piette calls it “phony food”), and produce and meat sourced from factory farms. The volume is impressive, but the quality dubious.

Her answer was to join the growing field of farm–to-table delivery services, hooking in local food dollars to support local farmers, vintners, ranchers and artisans. It’s a winning formula – the local economy is supported, and people get better, healthier, fresher food, while lowering the region’s overall carbon footprint by limiting trips to the grocery store.

“I went back to my original concept,” Piette said. “A collective of local, sustainable farmers supplying farm boxes of fresh food I deliver directly to the consumer.”

Through the Out of the Box website, shoppers can sign up for boxes filled with an entire week’s full of meals, with accompanying recipes, or they can pick and choose items knowing that all the ingredients come from sources within a couple hour’s drive of their door, and all come from sustainable (often certified organic) farms, pastured meats, happy chickens, small, local bakers and artisans whose specialty might run to Argentinean empanadas or Malibu honey.

Customers place orders online, she contacts her suppliers and collates personal farm boxes that are delivered right to the customer’s door. The prices are about what you’d spend at the Farmers Market, but you don’t have to bother looking for parking. How does she find her suppliers?

Piette scoured internet sites for inspiration. Then, she spent some time getting to know her suppliers. She traveled north to Santa Barbara County and south to the Mexican border, finding 7th generation ranchers and Venice, CA-based bakers who use wild yeast that triples fermentation time to create beer baguettes.

She devises seasonal boxes like the Cinco de Mayo box that featured Epazote, an ancient Aztec herb, Sangre de Torro Beans (a heritage bean found only in Mexico – but she sources from Fair Trade farmers) and Rancho Gordo Piloncillo Sugar (“I like to throw in regional stuff,” Piette said). She teams with celebrity chefs and cookbook authors like Mariel Hemingway and Dorothy Reinhold to devise meal menus for the less-confident home chef.

And mostly she works to serve her mantra: The Food Revolution is here.

It’s not always an easy message to get across.

“You have to address a few generations of Americans who don’t cook,” Piette said. “Corporate food interests have convinced us that defrosting a pizza is cooking. Which is ironic because studies say that we spend much more time watching how food is prepared on cooking channels than actually cooking food.”

She also struggles from lack of investment funding. She has one full time employee and hasn’t paid herself a dime since she launched in 2011. Looking at similar organizations, such as Good Eggs in San Francisco, she says wistfully, “Well, they really have deep pockets.”

She currently has 350 subscribers and makes about 130 deliveries a month – all in the Los Angeles area – with an average order of $168. In 2012, she did $300,000 in sales, almost breaking even. However, she is encouraged by national health studies that support her vision and by the enthusiastic backing of local customers and suppliers.

“I read a 10-year study that followed people till they were 65 or older,” Piette said. “It showed that people who cook for themselves five times a week have a 47 percent higher chance of being alive in another 10 years. People want to eat healthy food. They’ve just forgotten how.”

June Louks is a Malibu client and booster for “eating local.” She herself maintains a substantial backyard garden and thinks Piette’s is the model for the future.

“Jennifer’s strategy is not easy,” Louks said. “She travels far and does the heavy lifting herself. She honors her food sources. But people are learning, the fresher the food, the better it tastes and the better it is for you.”

Accordingly, Piette is on a mission of education as much as finding new business. She regularly makes presentations to local schools and wants to start marketing directly to the young urban professional – preferably who is pregnant.

And she is teaming up later this month with a large national retail entity to reach a critical mass. She doesn’t want to jinx things by revealing names yet, but is excited about the opportunity to finally scale her business and expand distribution opportunities.

“I need marketing, I need a bigger team,” Piette said. “This is about investing in our local food systems and laying foundations for a healthier community. I’m creating my own mini food hub here as a prototype. We want to roll this idea out nationally.”