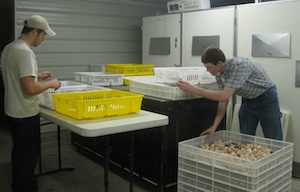 Simply put, Joel Martin loves his job. He and his wife Martha run a sustainable hatchery on their New Holland, Pa., family farm, where Martin says through his work, he has the privilege of witnessing the wonder of life.

JM Hatchery breeds domestic poultry for sale to customers in their local area, as well as to many people throughout the United States. After purchasing their Lancaster County property in 1984, Martin began raising Guinea Fowls for the Big Apple’s live poultry markets, where dealers would sell his Guineas to market-goers. In 1996, when Gingrich’s Animal Supply in Fredericksburg, Pa. approached Martin asking him if he would like to hatch Silkie chickens, he dove into the awe-inspiring world of hatching baby birds.

Upon developing a business Website in 2002, Martin discovered there was a large demand for these birds, not only in his local area, but throughout the country. What originated as a career within the New York City live poultry market has expanded to a full-service mail-order business operation. Today, JM Hatchery hatches French Guinea keets, White Bantam Silkie chicks, Freedom Ranger chicks, White Muscovy ducklings and Khaki Campbell ducklings. “Our focus has been to do five lines of birds and to do them well,” Martin says, explaining that his four daughters and their families are actively involved in the family business, raising the different breeds on each of their properties. Part of the family-centric hatchery’s mission is to form one-on-one relationships with its customers. “We don’t want to get so big that it becomes impersonal,” he says.

JM Hatchery raises its own breeder stock and hatches its own eggs. But, it does import its breeding stock of Guineas, Freedom Ranger chickens and Muscovy ducks from France. “They have developed organic, free range birds, and are meeting the demand for organic, free range products,” Martin explains. “It’s also happening here, but it has happened quicker in Europe.”

As a natural participant in sustainable agriculture, JM Hatchery strives to meet these growing demands in the United States. “It is kind of a niche market that is growing,” says Martin. “We are trying to fill the need that is there with the birds that we breed, because a lot has been lost [in our country] as far as being sustainable.”

Like many other supporters of sustainable agriculture, the Martins are taking part in a new whole food trend that had been the norm generations ago before our food system became compromised through corporate interests and big-box stores. “This is a throw back to what our parents and grandparents have always known, which has been lost,” explains Martin, who says that their hatchery helps people return to simpler, more wholesome times.

“People are growing and raising their own food, because they are concerned with what is happening to our food supply. This is an opportunity to meet the needs of people looking for a sustainable product that they can raise for themselves. We give them the opportunity to get a bird that is in its original form and that has not been genetically manipulated in any way.” As a result of raising their own food, he says, people are more aware of what they are putting into their bodies.

That desire for sustainable, healthy and delicious food is apparent in the breed of chicken the Martins opt to hatch: the Freedom Ranger. Unlike the fast-growing factory-farm-preferred Cornish Cross, which are bred to reach slaughter weight in about seven weeks, the Freedom Ranger grows at a slower rate as nature intended and it forages for much of its food. “We don’t do anything with White Cornish Cross fast-growing birds,” he explains. “The Ranger will act like a chicken, diving under bushes when a hawk flies over, and scratching and looking for bugs. All White Cornish Cross do is poop and eat.” Martin also explains that most people find the Cornish Cross’s meat to be far inferior to that of the Freedom Ranger.

For Martin, the biggest challenge at his hatchery is managing the breeder flocks, which must be done a year ahead of time. “I’m currently planning my breeding stock for next summer,” he explains. “I need to decide today how many breeders to mark down for next year. Before I set eggs, I have to anticipate how many I need to sell. The biggest challenge is to anticipate the demand and plan for that a year-and-a-half ahead.”

But, for Martin, the joys of raising a sustainable product for his customers outweigh the challenges of planning for upcoming seasons. “Seeing those chicks hatch every week is a miracle of God,” he says. “It is just incredible to see it happen.”