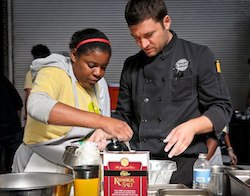 The program, Next Urban Chef, is modeled after the wildly popular Next Iron Chef television series, and focuses on youth education and leadership development around local food.

Next Urban Chef teams students up with a local chef. Each team is presented with a box of produce, spices, meats and grains all locally sourced from Eastern Market vendors. The teams are then challenged to create a healthy, tasty meal out of it.

The program launched in 2011 as an initiative of the Detroit-Flint Metropolitan Agriculture Initiative, with two chefs and eight students who were identified by Heeres from local community garden programs. In the first year, students met with the chefs prior to the event to discuss a strategy, and then participated in the competition.

According to Heeres, while the kids were very excited about the competition, the format wasn’t really conducive to getting the message across about the importance healthy and local food. So for 2012, Heeres instituted an application process including a required essay asking students why they are interested in food and cooking, what their signature dish is and what ingredients they use to cook it, and their thoughts on why it is important to choose local food from Michigan.

“It helped them become a bit more engaged,” said Heeres.

Participating students were also required to attend four learning sessions prior to the actual competition, which covered some of the basics on nutrition and local food. The sessions helped to build awareness about the local food system in the City of Detroit, in which many impoverished neighborhoods, particularly those with a significant proportion of residents using supplemental food assistance, do not have convenient access to grocery stores with healthy, affordable food.

Opening student’s eyes to the injustices of the local food system in the city, particularly the health impacts of fast food in low-income communities, was an especially satisfying outcome for Heeres. She recalls one young girl, when asked a question, who quipped, “Why don’t you ask McDonald’s – they rule the world?”

The program is not only about educating students on the injustices faced by their communities, but also about empowering them to do something about it.

“Kids get angry about it,” says Heeres. “But the students have never thought about their food before, and now they feel like they need to know where it came from.”

Eastern Market Corporation, Capuchin Soup Kitchen, Whole Foods and the University of Michigan underwrite the program. A 2012 crowdfunding campaign raised over $5000, which helped to purchase supplies, offset costs and provide a small stipend to staff the event. Chefs and judges volunteer their time.

For 2013, Heeres moved the competition up to June to avoid the challenge of keeping the students engaged over the summer. The competition will continue to grow, expanding to 24 kids and 6 chefs.

The program is currently independent of any official organization and is in search of a home base that can provide some additional resources and stability. In addition to her full-time job as a health educator, Heeres coordinates the program and raises funds in her spare time.

She sees engaging youth as the only way to truly change a food system in a city like Detroit, where many residents have so little access to fresh local food.

“I see a lot of young white faces in the local food movement in Detroit,” she says. “It has to be more than SLOWS Bar BQ as the face of local food in this city — it needs to be more about involving the youth in growing a food movement, about their health and about the job potential for them.”