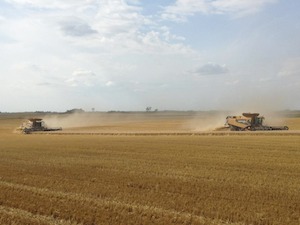 Yet, there’s one definition of sustainable farming that typically doesn’t make the news headlines, especially those containing the word ‘green:’ A family-run farm that sustains a multi-generational family.

Mattson Family Farms is a no-till commercially viable farm that has beaten the odds for a century. “My grandfather immigrated here from Denmark in 1911 to homestead,” says Carl Mattson. The farm is located a little over 100 miles east of the Rocky Mountains on Highway 2 on a plateau about 3,200 feet above sea level.

A century later in 2013, ninety percent of the wheat grown on the farm is exported off the West Coast, destined to feed hungry mouths half a world away in Asia.

The focus of Mattson Family Farms is on conserving the soil and fertility of the land, and the family has been recognized as leaders in conservation for years. Mattson says the number-one factor that limits production is a scarcity of precipitation. Not tilling the fields is akin to keeping a lid on a jar – the water stays in the soil, protected from the sun’s heat, which causes moisture to evaporate.

Anything we can do to conserve water in our soil is good for business, he says. “The fields are our factories.”

The family instituted no-till farming in 1993, after gradually working up to that change over a period of several years. Since then, the resulting transformation has yielded impressive results, as the production improved, because the soil stayed in place despite the strong winds that sometimes blow through the region. “The earth worms are coming back into the soil, the soil tilth is better and we have very little if any erosion,” Mattson says.”

The farming operation is amazingly productive, too. The average annual yield of around 30 bushels an acre translates into the equivalent of six million loaves of bread produced annually on the farm. That’s enough one-pound loaves to give each Montanan six loaves of bread a year, if that grain was not exported. Yet, the bulk of Montana’s wheat is shipped overseas to ports in Asia, where a lot of stomachs need it, he says. Those nutritious grains of wheat contribute to a more peaceful world, he says.

“We’re looking at a world right now that has seven billion people in it. That’s predicted to grow to nine billion by the year 2050, and commercial agriculture plays a huge role in that, as the U.S. is the main residual supplier of grain throughout the world,” Mattson says. “Every time something goes wrong in a country they send our boys over there to have a little chat. As long as we can keep the other nations in the world solid with food supplies, we’re in pretty good shape.”

Sustainable farming ultimately must support the farmer, too. Even so, it’s difficult to exist on a small farm, albeit possible if you’re growing tomatoes. Cultivating enough wheat to sustain a family farm requires vastly more land than a farmer growing tomatoes. That’s why it usually comes down to an economy of scale in order to survive, Mattson says.

“A family of commercial wheat producers — that is what we are. We are pro biotech, pro conservation and pro business, and we apply pesticides and commercial fertilizer on an as-needed basis. Quite frankly we challenge anyone to be more sustainable. If they can be around in a hundred years, good luck.”

So, what is sustainable farming? According to Mattson it’s a multi-focus approach with three legs: It supports the farmer, the environment and society. And, there you have the essential kernel of truth on successful wheat farming from a family who’s been at it for a century.