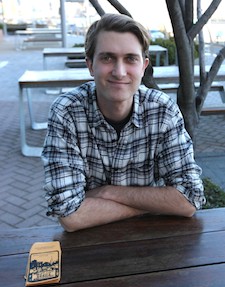 Eventually, he was hired as the farm manager for Riverpark Farm, supplier for Riverpark restaurant, and one of the largest urban farming models in New York City (they launched their rooftop farm on the site of a stalled construction site).

“The thing with growing on city rooftops, you get produce that can survive pretty harsh conditions,” Pickens said. “We get 16 hours of sunlight a day, extreme wind and serious heat in the summer. You learn what works in this particular environment. If you have something that can survive New York summers, you’ve got something that will thrive.”

Pickens cultivates some 7,000 milk crate containers lined with landscape fabric, growing tomatoes, peppers, peas, herbs and other produce for the restaurant (and the same, on a smaller scale, on his own rooftop). His success allowed him to offer classes on rooftop gardening to a generation of new young professionals eager to “do something about the environment” while insuring a fresh, healthy, daily food supply.

This led to Pickens’ development of gardening curricula for local public schools, like PS20 in Brooklyn.

“Neighborhood parents actually came and asked me to do this,” Pickens said. “Their science lab was essentially a greenhouse, with one whole wall of windows. We grew food and flowers and the kids loved it. They held a plant sale on Mothers’ Day to raise the money for the next year’s farm program.”

With grow space so tight, Pickens didn’t have time to waste on produce that wasn’t flourishing, so he started to save seeds from plants that were the most productive. When he replanted the next season, with rich results, he realized there was a niche market for seeds acclimated to an exact growing environment. Rooftop Ready Seeds was launched and now offers 25 seed varieties of peppers, tomatoes, herbs, greens, okra and collards.

“Rooftop growing has some pretty specific requirements,” Pickens said. “There’s the weather to consider, but also the site itself. Older buildings have the structural integrity to hold the weight of containers of soil and water. But the newer buildings, not so much. I tell my customers to look for old warehouses built before the 1950s.”

Pickens also found a surprising population of micro-gardeners thirsty for gardening knowledge. He was there to advise on best organic methods (“I’m not certified organic, but I only grow organically, with no pesticides,” he said), best traditional composting and worm composting practices (composting is a major factor at his Riverpark setup), and best seed sourcing.

He works with neighborhood nurseries and plant shops. Brooklyn Grange is a rooftop farming company with two-and-a-half acres of rooftop cultivation located in Queens and Brooklyn. Pickens swaps seeds, all open pollinated, with them.

Kimberly Sevilla is the owner/manager of Rose Red & Lavender, a flower, plant, seed (and “all things beautiful”) shop in Brooklyn. She met Pickens when he was a novice grower and has worked with him to develop seedstock for several years now.

“Zach’s seeds are really special because they are grown on local rooftops and acclimated to the local environment,” Sevilla said. “They are so hardy I can recommend them to even first-time gardeners who don’t know anything. All his seeds are open pollinated, so you get healthy cross breeding that keeps on going for generations. What he’s doing is really a great service for the community.”

Both Sevilla and Pickens have said they’ve noticed growing numbers of urban farmers in their neighborhood, originally a bastion of first-generation Italian immigrants who were culturally rooted in home kitchen gardens.

“Now we’re seeing a transition of young professional people moving here and they are concerned about their food,” Sevilla said. “They understand that in close quarters, like we are here in Brooklyn, you have to go organic. You don’t want chemical pesticides and fertilizers around you or your kids.”

Like Sevilla, Pickens’ overriding ambition is to teach his community how to grow in small plots. Rooftop Ready Seeds isn’t a profitable entity yet. He is his only employee. He relies on online sales and personally delivers seed packages to three area garden shops.

But he also works with Red Hook Community Farm in lower Brooklyn, an urban farm built on the site of a weed-filled, abandoned baseball park, and designed to teach urban youth how to grow urban food and stimulate local economic activity. As he sees it, he’s just helping teach the next generation of farmers to feed their communities.

“I think there are tons of opportunities to grow in the city,” Pickens said. “And locally grown food reduces our carbon footprint, reduces chemical pesticide use and is nutritionally better for everyone. We’re just getting started.”