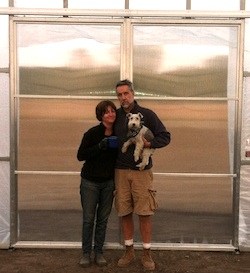 After a 2-year land search, Jaroch purchased an 11-acre parcel that had been under conventional commodity crop cultivation and launched Cold Frame Farm. The parcel sits just a few miles outside of Romeo, a historic village about 40 miles north of Detroit where Jaroch lives with her husband.

The Romeo area, surrounded by conventional agriculture intermixed with suburban development, is known for its apple and peach orchards. Once certified, Cold Frame Farm will be the first organic farm in the Romeo area. Jaroch is pursuing organic certification through the Ohio Ecological Food and Farm Association, and will have to demonstrate three continuous seasons of organic agricultural practices to qualify for organic certification.

In order to extend the growing season, Jaroch set up a A 30 x 96 foot high-tunnel cold frame hoop house on the property in the fall of 2012 that was paid for with the assistance of a $6,000 grant from the Natural Resources Conservation Service’s Seasonal High Tunnel Initiative Program. The program offers financial and technical assistance to farmers meeting certain eligibility requirements, including employment of agricultural conservation practices.

A high-tunnel hoop house is an unheated greenhouse that allows farmers to grow cold season crops outdoors in cold climates sustainably, extending the growing season with no energy costs. Cold Frame Farm’s first cold-season crops were planted in September 2012, and included a mix of salad and kitchen greens. Throughout the winter, Cold Frame Farm sold produce harvested the day before directly to customers at a “Friday Farmstand.”

So far, sales have been brisk according to Jaroch. “We have not discarded any greens,” she says, and customers enjoyed picking up fresh, local produce in the midst of Michigan’s frigid winter.

Eventually, Jaroch plans to sell produce primarily from a farm stand, which will be held on the farm property once the Romeo house is sold. Jaroch does not see farmer’s markets as a viable alternative in her area; because of the proximity of local farms, local farmer’s markets tend to have slow traffic. She is considering starting a CSA in the future, but wants to focus on ramping up production in 2013 without the pressure of a subscription service.

Two additional hoop houses are planned for the property this spring, and 3 acres will undergo cultivation during the summer months. The rest of the property is planted in a restorative cover crop known as ”green manure” – plant material grown, uprooted and worked into the soil to improve soil fertility. The cover crop includes a mix of rye, red clover and hay vetch.

The major challenges for starting up the farm have been mainly financial – start-up costs including land, materials and equipment have been substantial, and the farm is not yet economically viable.  Jaroch has been supported by her husband’s electrical contracting business through the transition.

In the long-term, Jaroch hopes to incorporate permaculture design into the landscape to heal damage inflicted by conventional agriculture methods over the years. The farm contains an incised drainage ditch that drains to a deep, artesian-fed pond containing pike and bass which spills over into a state-designated trout stream. Jaroch hopes to eventually undertake a stream restoration project using native plants to help heal the landscape.

While this year the farm will focus on fruits and vegetables, including mixed greens, strawberries, herbs, and sunflowers, Jaroch hopes to expand into perennial fruits like berries, fruit and nut trees, and asparagus.

She also wants to grow and sell cut flowers.  “They will add a bit of beauty to the mix,” she says.