Could Atmospheric Water Generation Power the Farms of the Future? 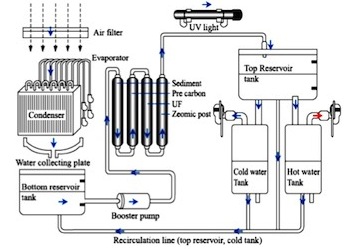 Most folks, farmers or otherwise, had their first introduction to vapor farms in the hit movie series “Star Wars.” Vapor farming is no longer a thing of science fiction. In fact, its an emerging industry that could change the way the world views water. We interviewed three of the top rated atmospheric water generation (AWG) system producers in the industry to better understand not only the technology, but its potential for sustainable agriculture. Atmospheric Water Systems, Inc. (AWS), EcoloBlue, Inc. and Island Sky Corporation happily explained their systems and the potential of AWG for modern farming.

Atmospheric water is exactly what it sounds like: water from the earth’s atmosphere. Everything contains water and everything has a dew point, the point at which vapor in the air condenses into liquid form. By determining and then maintaining that dew point, a system that continuously inhales air, condenses the vapor and turns it into water can be established. The systems contain filters to increase purity, maintain pH and add nutrients. Its rainwater in a box.

“There’s 3.1 quadrillion gallons of water vapor all the time so that’s ten feet of water, for example, covering the entire United States forever,” explains Randal Moos of AWS. “It’s always there; it will always be available and what we do with our systems is we take it and we borrow it.” Atmospheric water vapor is sustainable, abundant and now captured by a number of companies that produce units for domestic and commercial use.

There are many potential uses for atmospheric water generation on the sustainable farm: cleaning and watering livestock, providing drinking water for farm workers, for domestic use in the farmhouse and of course, for the production of crops. “Atmospheric water is pure, thus allowing organic farmers to feel confident that they are not compromising their crops,” explains Traci Mondella of EcoloBlue. Pure water systems have the potential to change the way growers look at their crops. Not only does a year-round supply of pure “rain” water mean an extended growing season and the ability to grow a larger variety of crops, it could also increase the efficiency and decrease the cost of vertical or hydroponic agriculture.

Atmospheric Water Systems (AWS) co-founder Randal Moos views greenhouse farming as the best way to utilize atmospheric water generation. “… it allows the farmer to grow and utilize the maximum amount of efficiency of their system by recapturing any lost respiration putting all that moisture back into their system,” states Moos. Aqua-farming and vertical farming are widely known as efficient ways to produce a large number of crops using little space. AWG increases that efficiency while reducing waste.

For most of the companies harvesting air moisture (and the industry is still in its infancy) the cost of research and design have made it difficult to launch a high dollar global advertising campaign to educate consumers about the potential of their products. Disbelief is a major hurdle for all of the companies to overcome. The ‘too good to be true’ factor has disabled a nascent industry that could potentially change the way we perceive water. These systems work. Getting people to believe that is the problem.

Richard Groden of Island Sky Corp explains the use of AWG technology in crop irrigation. “We have found that by delivering this water through a pipe irrigation system that places the water right at the roots of the plant with no evaporation we can reduce water usage tremendously and produce a very high crop yield. We feel this system is perfectly suited to truck farming, greenhouse farming, and hydroponics.” During a growing experiment in Florida last year Groden’s team managed to triple crop production using a tenth of the water.

So how much does this technology cost? All the companies offering air to water systems admit that the actual cost of a unit would depend on a number of factors including quantity, type and efficiency by environment (taking into consideration climate, aridity and elevation and how it affects the dew point of air based moisture). Obviously custom built machines such as those offered by the folks at AWS would be more expensive but certainly more efficient being made to order models. The size of your farming operation makes a difference. If you plan to use the system as a surplus to your municipal or off grid water supply the price will obviously be lower than if the system becomes your main water source.

The farmer’s individual need plays a major role in company choice and system selection. Custom built industrial scale units are the core focus of AWS since they released their basic drinking water units a few years ago. They collaborate with organizations across the globe from bringing water to villages in rural Africa to constructing hydroponic units for alternative energy greenhouses in San Francisco. Their basic stand alone drinking water unit, ideal for the small family farm, has a purchase price of $2,195 and produces 25 liters (6.6 gallons) a day. The basic units can be connected in a daisy chain fashion for larger growers.

For farmers looking to alleviate the affects of seasonal or unexpected drought conditions (and according to the 2012 Palmer Z Index that could be as much as 55 percent of the country), the folks over at EcoloBlue offer their 12 step filtration systems as a way to reduce or even reverse drought conditions and maintain crop production. Their smallest industrial sized unit, the EcoloBlue 200, has a purchase price of $11, 400 and can produce 200 liters (52.8 gallons) per day. Their smaller domestic or family farm size unit, the EcoloBlue 30, starts at $1299 and produce 30 liters (8 gallons) per day.

Over at Island Sky, president Richard Groden and his team have developed and patented “Adiabatic Distillation,” a closed loop refrigerant system that utilizes a condensation chamber to capture water vapor. They use an ozone generator to eradicate impurities. Their Skywater machines come in both domestic and industrial, or high volume, models. They offer units comparable in price and production quantities to AWS and EcoloBlue.

Randal Moos of AWS explains that as with any new technology or alternative renewable product the initial cost will decrease as more and more people adopt the product as a part of their personal or industrial water culture. Whichever system or company a farmer chooses its important to remember there will be maintenance costs for the systems. This includes filter changes and general cleaning to prevent dust and debris build up. If used in collaboration with alternative off grid power sources the cost of the system goes down dramatically because you don’t have to pay for the electricity to power the units.

All the companies in this article are continuously searching for ways to improve on their systems and increase the variety of their products. For instance, AWG is currently collaborating with the federal government to produce a vest that produces pure water and stores it for military use. Island Sky is working on a new unit that drastically reduces energy use and thus cost while EcoloBlue looks to become the go to replacement for the classic office water cooler.

The first time you hear that people are turning air into drinking water its natural to be a little skeptical. These days all we hear is how much we need to conserve ground water so it’s hard to believe that a cleaner more abundant alternative is all around us; but it is. The rainmakers have already set up their storefronts and are offering the perfect companion to sustainable agriculture and organic growing. The future of farming is here. It’s time to spread the word.