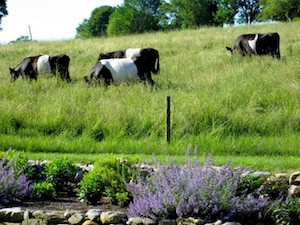 Sustainability isn’t just a token phrase at Mainstone Farm in Wayland, Massachusetts. It’s in their tagline. This “sustainable and natural” farm has been in cultivation for almost 150 years, and managers Tim and Pauline Henderson intend to preserve its fertility. “Even for our own garden, before we got into vegetables in 2003 or 2004, we never used pesticides,” explains Pauline. “It’s just something we believe in.”

Through practices like cover cropping, composting, and crop rotation, Tim and Pauline preserve soil health and ensure that the land remains fit for vegetable production year after year. Their 30 acres of vegetables are hugely productive – so much so that Pauline can’t even approximate the farm’s annual vegetable output in pounds. “We do so many crops, and with two or three plantings, I just couldn’t tell you,” she laughed.

Mainstone grows a huge variety of vegetables – everything you could imagine, from Brussels sprouts to watermelon to eggplant. Even in chilly, wet March, the farm is selling beets, carrots, and potatoes as well as their maple syrup, corn meal, and meat products. Their farmstand is open from mid-March to mid-April on Saturdays, and then picks up full steam through October. During the peak of the season, Mainstone’s farmstand is open seven days a week. Pauline notes that demand for their products continues to grow each year.

The farm also runs a CSA for the duration of the harvest season. This year’s CSA was full by early February. Their 45 CSA members are primarily from their local community. “Mostly they come from in town or surrounding towns,” says Pauline. “We keep the CSA small because we want everyone to get enough product. And we like to get to know our CSA members personally.”

Mainstone’s CSA is a bit different than your typical farm share. Tim and Pauline don’t select which items CSA members will receive each week. Instead, members pay for “Mainstone Money”, which can be used at the farmstand any day of the week. The Hendersons chose this approach because shareholders like the added flexibility. In other CSAs, “people just get so many vegetables and don’t know what to do with them. Or maybe there are certain kinds their families don’t like to eat.” With Mainstone Money, CSA members can buy what they want from the farm without worrying that their share might include unfamiliar produce. CSA members also receive a return on the money they pay for the share, and returning members receive an additional 5% bonus in Mainstone Money.

Mainstone originated as a dairy farm, and while the farm no longer produces dairy products, the Hendersons still raise and sell animals. Their heritage breed beef cows are entirely grass-fed, and their pigs are pasture-raised and fed on corn and vegetable feed. All of their animals are raised with absolutely no hormones or antibiotics. In addition, the farm produces its own maple syrup from trees tapped on their sprawling farm, reaping about 40 to 60 gallons of syrup each year. Their syrup, meat, and other farm-made products such as corn meal and firewood are available at their farmstand.

As Mainstone enters into its tenth season of vegetable production, Pauline reflects on some of the challenges they’ve faced as an almost entirely chemical-free farm. “We’re not organic,” she clarifies. “We do use a chemical if we need to save a crop. Desperate times call for desperate measures, and we have a lot of money invested…so if we lose a crop, that’s it. It’s a constant battle [to keep the crops healthy]. We try everything not to use chemicals.” When I ask what kinds of organic practices she uses to prevent weeds and pests, she laughs. “Well for weeds, nothing works. We do a lot of pulling and hand weeding. We use black plastic on transplants, and that works pretty well [to prevent weeds from sprouting].”

But for the Hendersons, their biggest challenge is out of their control. “It’s definitely the weather. Every day, every year is different. We don’t have a problem selling our product, but the weather goes from one extreme to the other. It could change every day.” In the Northeast, weather is every farmer’s obstacle. But Mainstone continues to grow their production and expand their reach. “We have a lot of support from the owners to keep the farm going,” Pauline concludes. She seems confident in their principles of sustainability and the positive impacts their growing practices will have on the continued productivity of Mainstone Farm.