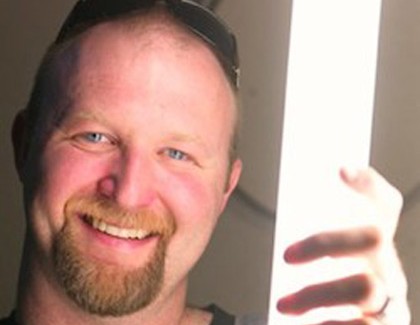 The hydroponics industry has the power to eradicate world hunger – if we’d only take it seriously, says agricultural expert Matthew Geschke. But that can be hard to do. Hydroponics trade shows cultivate a party atmosphere that caters to grow-your-own stoners. Decorated with kegs and half-naked women, there is very little talk of saving the world. For Geschke, a hydroponics designer who desperately wants to be accepted in mainstream agricultural circles, it’s an embarrassment that relegates a critical farming alternative to the shadows.

Geschke explains that, as is commonly accepted among agricultural circles, a well-designed hydroponic system is “capable of producing seven to 10 times more produce than traditional agriculture in the same given footprint, assuming all necessary demands are met.” These systems, which grow plants in water using mineral nutrient solutions without soil, are built to recreate the plants’ natural environment. This is what makes it such an efficient and sustainable operation.

“My belief is that there’s no amount of human knowledge that’s been derived in the last 10,000 years that can outstrip the 4.4 billion years of evolution that has shaped whatever plant you are trying to grow,” he stated.

The potential for exponentially greater returns, growing flexibility and resilient sustainability would seem to make hydroponics a no-brainer alternative and buzz word in food security discourse. But Geschke still feels held back.

“The problem that I have with hydroponics right now is the stigma that’s associated with it,” he relayed. Geschke explains that if he were driving his truck back in his Ohio home state loaded with some flood trays, drip-a-meters, and water pumps, he’d in all likelihood be pulled over and questioned. He feels uncomfortable suggesting it even to his parents as a viable alternative because he knows what their response will be: “We don’t really want choppers flying over our house, son.” The association of this kind of technology with federally illicit crops seems hard to shake.

It makes sense when you look at its history – the industry was originally funded by cannabis cultivators, a three-generation lineage that continues to dominate hydroponic development and manufacturing. These expert pot growers are the best in the world at what they do, according to Geschke. But their three-decades worth of research-based knowledge has gone unshared to scientific and agricultural communities, held captive by the face of stigma and passed on internally like folklore from generation to generation.

“Until the industry is willing to clean up its image, it’s going to be difficult for us to meet the mainstream,” said Geschke, referencing those keg-clad trade shows. “It precludes large scale, valid investors from becoming involved.”

With those sticky politics and a delicate, precision-required technology to navigate, Geschke says that what needs to happen is a wide-scale dismantling of egos and a cooperative unison of varying experts with like goals. And he’s leading the march.

A few years ago, Geschke set out to form an aggregate of the best people in relevant industries who shared his vision and taste for professionalism and idealism. Together, they formed Brotherhood Products, a company that invents, manufactures, and distributes hydroponic equipment. Brotherhood acts a sort of hydroponic tech think tank. Companies or individuals can approach the team with a problem or an idea and they’ll design and develop a custom solution. This approach reflects one of Greschke’s main tenants – that instead of making compromises with standardized equipment, the growing system should be fitted to suit the specific needs of each evolution-perfected crop. From plastic formers to military warhead engineers and web designers, the dynamic team does all the work in-house, from concept to completion. Unlike most other manufacturers, nothing is subcontracted; all the infrastructure is internal.

It’s this collective initiative that will allow Geschke to help shape the future of hydroponics – a future that could have global implications. He sees hydroponics as a viable resolution to food security issues because of its capacity to function “completely off the grid.” In countries or villages with no existing infrastructure such as running water or electricity, he envisions setting up a fully functional, controlled environment from just two pallets, creating energy efficient greenhouses that run autonomously. He’s a self-proclaimed purist who, quite simply, “wants to feed people.”

“We have every single bit of technology we need right now to eradicate world hunger,” Geschke stated. The problem is a lack of synergy. He likens it to having a garage full of very powerful, but entirely unorganized tools. No one knows how to use them together, in harmony. But with a little bit of clean up, “we could really bring about some serious global change.”

Geschke encourages anybody with questions or ideas to reach out to Brotherhood Products.