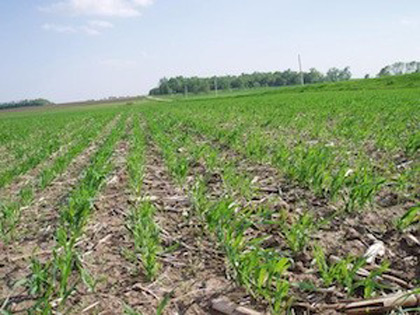 The Midwest Organic and Sustainable Education Service (MOSES) Organic Farmer of the Year award has been a long time in the making for Johnson Farms of Madison, South Dakota. Charlie Johnson and his brother Allan, along with their cousin Aaron and a handful of farm laborers, manage 2,800 acres of South Dakota farmland growing the ingredients for organic animal feed. On his way to pick up the award, Charlie Johnson shared a few insights into organic farming from the ‘long haul’ perspective.

It was Charlie and Allan’s father who started the farm in Madison. “My dad was a different kind of character,” explains Johnson. “He was kinda half hippie half profit.” Bernard Johnson had toyed around with the idea of chemical free farming for decades. He converted to a 100 percent organic production in 1976, years before the organic movement really began the paradigm shift from fringe obscurity to national awareness. Unfortunately, Bernard Johnson passed away in 1986 leaving his two sons to manage the property. They have done so successfully for the last 30 years.

Approximately 1,800 acres of the Johnson Farms property is dedicated to the growing of corn, oats, soybean and alfalfa. Using a six year crop rotation method, Johnson currently has 900 acres of product in row crop production. The crops are grown without commercial fertilizers and weed reduction is a physical rather than a chemical process. The Johnson brothers walk all 900 acres of their row crop during the season. The majority of the crop is transported to organic feed producers around the country but the farm also produces food grade soybeans.

Along with the organic crops, Johnson Farms boasts 200 head of Black Angus Gelbvieh cattle. The cattle receive rural drinking water reducing contamination of standing water and creeks on the property. The stewardship of the land and cattle earned the farm honorable mention by the South Dakota Soil and Water Conservation Society back in 1996. In his years on the farm, Johnson has learned a lot about sustainable agriculture, weeding, pest control and healthy crop production.

“Well basically the alfalfa is a key component because its a good smother crop for cleaning your ground up. Then we plant late. We try to, in the spring, let the soil warm up to germinate then flush the weeds once, if not twice, and try to plant at a point where the soil will allow quick and rapid germination. That’s been the key for us. We’ve run into problems when we’ve tried to be too quick or too early,” explains Johnson. The farm relies on rotary hoes and physical labor to produce their annual crop.

Oats are planted first and the corn second to avoid cross pollination with neighboring farms using genetically modified corn seeds. Johnson Farms uses only conventional seeds for their crops. Their crops are certified organic and Johnson admits it takes hard work and attention to detail to maintain organic status, but its necessary to command higher prices and to provide consumers with farm to fork provenance.

“You can literally take any organic product […] and be able to track the ingredient that went into that food all the way back to the processor through the shipment to the farm […] to the particular field where it came from. Everything that leaves my farm has to have a lot identification. […] I can pinpoint it back to which field it came from,” states Johnson.

At a time when farmers are reeling over additional paperwork, federal certification, testing and inspection, Johnson sees little problem with the process. “I would say 99 percent of all organic people, producers and growers, just by their own character and background will adhere to organic standards,” shares Johnson. “…but you always have that one or two percent that could be the bad apple so by having that third party review with inspections and guidelines set up it literally puts the organic industry in a light where if its ‘organic’ its organic.”

When it comes to advice for young farmers, Johnson believes it’s all about having the opportunity to take a risk. Johnson feels federally subsidized crop insurance has contributed to exorbitant land prices that restrict opportunities for many young farmers.

“I think the biggest threat to our young producers is the high price of land. I don’t care if you are organic or conventional, if we don’t get our arms wrapped around the problem of sky high land prices we are, as a society, in dire straits,” explains Johnson. “We’ve got federal crop insurance that is so highly subsidized […] it distorts the free enterprise system.”

Reasonable land prices, a sense of risk and a lot of labor intensive practices are Johnson’s best advice for young farmers in a system that he views as still in its infancy. “Its been on a constant upward trend for several years now. I just don’t see anything stopping or preventing that so its going to become more common, more needed and more wanted,” states Johnson. “I think just in the sense that there is high demands for organic commodities I think its important we try to bring more producers into that industry. Because if we don’t provide the product people want, it could backfire on us and we could lose our market.”

Marketing organic produce can be a challenge for small producers and Johnson Farms is no exception. Charlie Johnson admits he’s no salesman and doesn’t have the time to market his product as intensively as it needs. Like many producers, Johnson Farms utilizes a marketing firm to handle the selling of the produce to manufacturers, to close the deal, and in most cases, arrange transportation of the crop. Currently he utilizes the services offered by the folks at NFOrganics, a part of the National Farmer’s Organization.

“Although I relinquish a commission I’ve got someone who knows what’s going on 365 days out of the year, which I don’t. I also tend to be a modest person so to get the biggest and best price out of something isn’t really my forte,” laughs Johnson. “Also, by having this agency I’m guaranteed payment. With the price of organic grain, even if just a couple of semis go out of your yard it’s between you and some distant processor, who may or may not be on financial good legs. Well, you’re at risk of losing a lot of money. […] If Michael Jordan can have a booking agent why can’t an organic farmer?”

So far, this marketing method has worked in Johnson’s favor. He receives prices far above the national average. Johnson Farms looks set to embark on another 30 years of efficient, experienced and sustainable organic farming.

In his ‘spare’ time Charlie Johnson acts as the Chairman of the Northern Plains Sustainable Ag Society that has promoted organic farming and sustainable methods for 33 years. He accepted the MOSES Farmer of the Year award on behalf of his entire farm, his late father and the workers that make his sustainable agriculture dream a stable, annual reality.