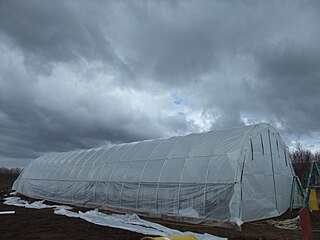 Pennsylvania State University’s Penn State Extension office is teaming with community partners in Philadelphia to put up high tunnels, which are considered an inexpensive way to extend the growing season for fruits and vegetables, the university announced.

The university’s College of Agriculture and Sciences sought funding for the acquisition and construction of 10 high tunnels. The funding was sought out, specifically, by the college’s faculty in the Department of Horticulture and extension educators in the university’s Penn State Extension office in Philadelphia.

High tunnels are made of a galvanized metal pipe frame, which is covered by plastic sheeting. Inside temperatures are controlled manually by rolling the structure’s plastic sides up and down, which allows the grower to improve yield and quality.

Various community organizations and farms are expected to benefit from the high tunnels, which now make up the High Tunnel Alliance, a network run by the Penn State Extension office in Philadelphia. The partnership has used funding from the U.S. Department of Agriculture Specialty Crops Block Grants awarded through the Pennsylvania Department of Agriculture to develop high-tunnel operations that produce year-round greens, such as collards, kale and spinach. The greens can then be sold to communities in the surrounding urban areas, according to the university.

Bill Lamont, professor of vegetable crops in the university’s College of Agricultural Sciences, said the high tunnels are particularly useful for growing fruits and vegetables in urban areas.

“If the trucks stop bringing food into any major metropolitan area in the United States, for whatever reason, in a short period of time there will not be any food available,” he said. “We want to give people in Philadelphia an appreciation for the value of food, its nutrition and what goes into growing it. They need to realize it doesn’t just grow on the shelves of grocery stores.”

“It also could increase access to vegetables and fruits—particularly for populations in so-called ‘food deserts’ that lack retail food outlets—and could help combat the alarming rise in obesity, especially in children,” he said.

According to Lamont, high tunnels are effective in protecting crops from low temperatures in both spring and fall. The tunnels elevate temperatures a few degrees each day over a period of several weeks, he said. They are used for various types of crops and cropping systems.

The partnership also hopes to construct six additional tunnels, which will be funded through another USDA and Pennsylvania Department of Agriculture Specialty Crops Block Grant. The plan is to locate these high tunnels at rehabilitation program living facilities for low-income elders, child-welfare agencies and schools.